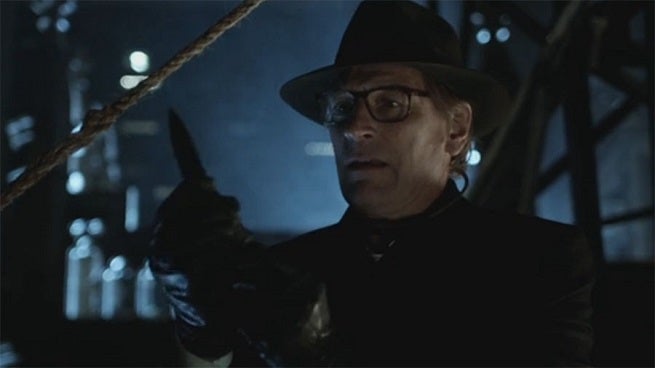 With titles like The Killing Fields and Room With a View on his resume, Julian Sands is arguably one of the most recognizable guest stars to pop up yet on FOX's freshman hit Gotham.

The DC Comics adaptation is moving full bore into the origin stories of Batman's rogues, and Sands is a big part of that, playing Dr. Gerald Crane -- father to Jonathan Crane, better known as The Scarecrow.

Sands joined us to talk about his role, and his long history in Hollywood.

So, you're one of only a few people who have been part of both the Batman and Superman universes with your Smallville and Gotham appearances. The first thing I thought when you were cast was, "Oh, he's good." The second was, "Hey, wasn't he Superman's dad?" 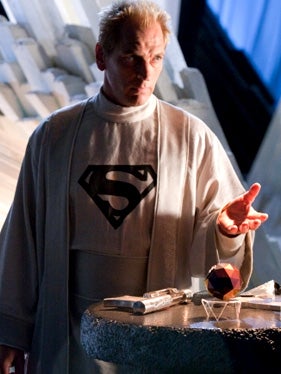 Jor-El, yes. I was Jor-El. As an actor, you take each role as it comes, as you find it, and decide if it's something that interests you and if you want to get involved.

Now, in the case of Smallville and playing Jor-El, I was familiar with Smallville and the world it presented. I was familiar with Jor-El as a character from the comic books and from Marlon Brando's presentations and it was a very pure and worthwhile experience for me in the couple of episodes where Jor-El was present, embodied physically, as opposed to just the voiceovers which Terence Stamp did. I felt very completed as an actor.

So I didn't see any conflict whatsoever when I was approached about entering into the world of Gotham. On the contrary, it was an intuitive decision on my part. I had a conversation with Bruno Heller but I wasn't allowed to read the scripts; I had to sort of get involved, commit, before. Knowing the conversation I had with him and his reputation for integrity, I knew that his material wouldn't be simply TV cartoon fodder, that it would be elevated.

I wasn't familiar with Gotham; I think at the time I was approached they'd only aired about four episodes, which I watched very quickly. It was evident that the production values and that the originality of his pursuit of these iconic characters, but as real people, was quite clear. The father of Jonathan Crane had never been considered before, and this was an opportunity to present someone as authentically and credibly as I could. What he'd written was fully three-dimensional, and with an interior life for me to embellish. So it was a completely different experience being involved with Batman as opposed to Superman; they weren't mutually exclusive. On the contrary, I kind of like the complementary aspect of it.

In other words, I thought it was a pretty cool gig and I was happy to do it.

When you're stepping into Dr. Crane and a version of the Scarecrow, you have this general concept but since it's really a new character, you get to put your own stamp on it. I can't even remember if he was ever in the comics. Is that kind of the best of both worlds?

I don't think he's in the comics. I think he's a creation of Bruno's team and therefore, the model I used -- you know, it's the anniversary of the Auschwitz release and there's been a certain amount in the press over the last month about Dr. Mengele. He strikes me as someone who was compellingly evil, utterly evil -- But I wonder if he believed he was simply a humanitarian, pursuing a pure path for the betterment of mankind through science. I don't know; he may have done.

For me, the Dr. Crane I present is a person who quite genuinely believes that the lot of mankind can be improved if only I'm allowed to do my work. Yes, it may mean one or two people have to be sacrificed. Yes, there is a body count, but I am doing my work for the good of mankind. And when my son Jonathan is observing some of my work and I see him look tentative and unsure, I say, "Jonathan, we've talked about this. What I'm doing is for the good of mankind. It will make things better for everyone."

Crane is motivated by this desire to overcome fear. He believes fear is an evolutionary throwback to primordial times. He thinks it belongs with the three-celled slugs in the Andalusian oceans. He thinks that if mankind can conquer fear, then everybody will have a better life. What it really is, what he's really trying to work out, is that he experienced personal trauma himself because he was afraid. That's something, I think, that he never forgave himself for but was motivated to keep pursuing a cure.

Whereas I'm a mountain climber when I'm not acting and let me tell you: fear keeps you safe in life. Fear is a very good thing; it gets your antennae alert.

You touched on something really interesting: that these things are born from personal trauma. You can see that throughout Gotham. Do you think that's an intentional thing that they're doing by design?

Well, I think it's an intentional component. I think these people in Gotham are all working through the difficulties of their lives. Trauma, certainly in the case of the major characters. But doesn't Gotham hold up a mirror to kind of what life is? Life is about reconciling your journey to the conditions and compromises and the suffering that one has to endure simply to get through week by week, no? I think that's why it's so fascinating, the Gotham template. Psychological profiles in Gotham. Because they're all flawed people trying to express themselves through some type of self-help therapy, it seems to me.

You'll know better than I when these characters were first depicted, but the fact that there's still such a -- not just a cult following but a broad, mainstream enthusiasm -- for these characters and the stories they tell, is because they connect with us all. I'm not a particular comic book enthusiast, I've enjoyed them in my life but I'm not a current reader. But when I was approached about Gotham, I got excited. Without knowing anything about the project, I just thought, "Ooh, wow. That's interesting." The reason for that I think is that it touches on the common understanding that life is not easy and life can be dark and aggressive and traumatic. It's how we respond to these challenges that makes us who we are, allows us to endure, allows us to have an interesting life. That's why I think people are so excited about this new television show, you know?

Is there anybody in the cast that you hope to be able to play off of, either now or in the future?

Yes. I mean, I think Dr. Crane and the Penguin are a very natural pairing. But in truth, I think both the characters are so well-written and drawn and the actors inhabit them so interestingly. So rebooted -- all the actors approach the characters with real ownership and that gives them an emotional authenticity which is very compelling to me but I think the real incentive for me to come back would be the writing. How Heller and his team create the stories. I think that's what -- because in lesser hands this wouldn't have been a show I would have been excited to participate in. I can't give enough credit to the production values, the production concepts, the production consideration that the creative team have brought to the concept.

One last question: in your experiments with fear, does Dr. Crane experiment at all with...Arachnophobia? 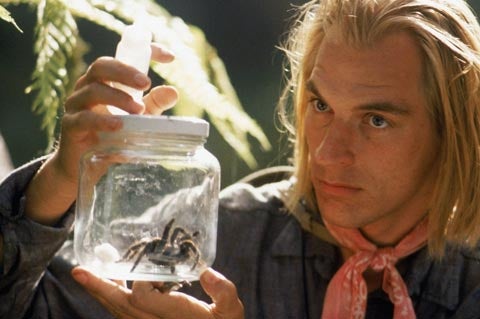 [Laughs] Uh...no! I've played a couple of doctors in my time and of course you're referring to Dr. Atherton. The thing about Arachnophobia -- and bless Frank Marhall and Spielberg -- is they touched on something that twenty-five years after the film was made or something, people still come up to me to tell me about their arachnophobia. It really touched a nerve, that film. I always love it when people tell me they wish I hadn't succumbed in the bar, but that was a good experience.

The thing about one's life as an actor is -- I'm in England now. I've just arrived from Istanbul, where I've been filming with my old pal John Malkovich, whom I first worked with thirty-one years ago on The Killing Fields. For us both, it was sort of extraordinary that here we were, still in the saddle, doing stuff which we found really fascinating and in a location and with people which enhanced our lives and made it interesting.

Therefore, the line from Arachnophobia and playing Dr. Atherton to Gotham and playing Dr. Crane is direct and pure. I hope I follow it and we're talking about something else down the road -- but that's the mystery. I don't know what that thing will be.