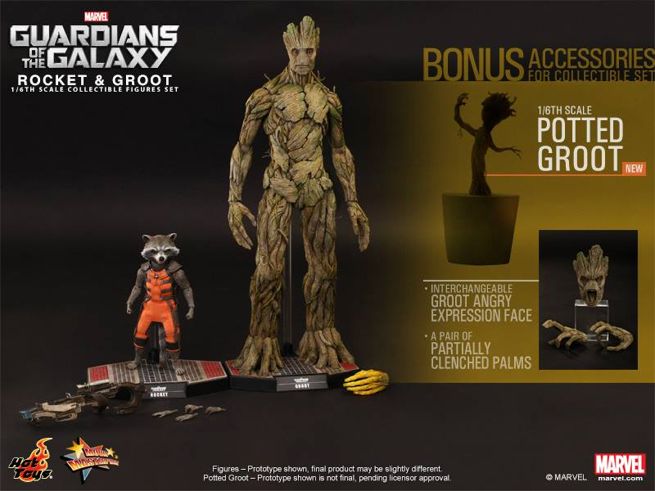 Hot Toys has just announced that they will be making a Potted Groot figure. Hot Toys does not appear to be selling the Potted Groot separately, but they are including it as a bonus accessory with their Rocket & Groot Collectible Figures Set. Here's is the announcement from Hot Toys.

Marvel Studios' Guardians of the Galaxy has been topping box-offices around the globe, the sci-fi blockbuster did not disappoint and broke the record of the highest opening in August! The Guardians of the Galaxy became a highly-popular topic among fans in all parts of the world! With a perfect mix of action, humor, and sci-fi elements, the movie captivated audience and won our hearts!

For fans who have already seen the film, there is a very memorable scene featuring a dancing Groot and now Hot Toys is extremely delighted to announce the 1/6th scale Potted Groot will also be included as another bonus accessory exclusively for everyone who pre-order the Guardians of the Galaxy: 1/6th scale Rocket & Groot Collectible Figures Set!

Hot Toys Making Potted Groot From Guardians Of The Galaxy