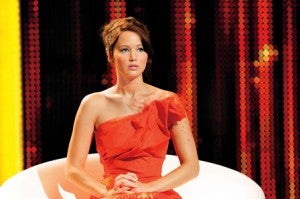 Barbie? Yep, that's a thing, according to The Hollywood Reporter. In just the latest in a series of licensed merchandise either available or at least confirmed for the popular book (and now film) franchise, Mattel today confirmed that Katniss Everdeen, the main character of The Hunger Games, will be immortalized as a Barbie doll. No images are yet available of the doll, but it can be ordered at Mattel's Barbie Collector website (though no listing for the product is online yet), a venue geared toward adult collectors, as well as other, as-yet-unspecified retail venues. Mattel has recently produced collectible Barbie dolls based on Twilight characters as well as the cast of the hit AMC drama Mad Men. In spite of almost universally good reviews and massive box office estimates that are starting to point in the direction of a $150 million opening weekend, Jennifer Lawrence has drawn a little bit of criticism because her portrayal of Katniss is a bit too lovable in the film as compared to her literary counterpart. Think this will help that perception?

Hunger Games Barbie on the Way From Mattel