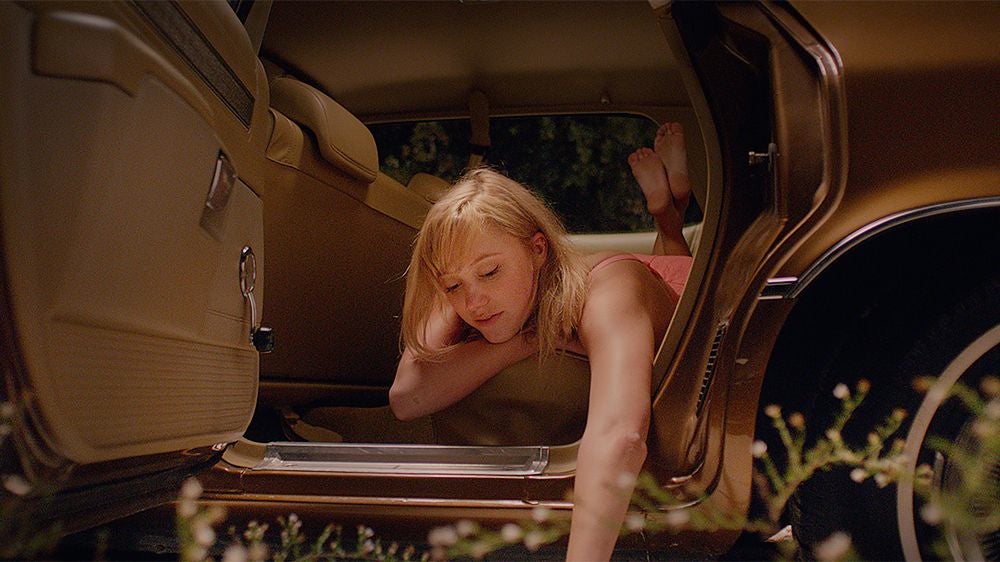 Seeing It Follows in theaters is something of a minor miracle for most Americans. The film was only distributed to 32 theaters for its opening weekend before being expanded to 1,218 theaters two weeks later. There's no doubt in my mind that it would have eventually discovered a viewership during its VOD and subsequent blu-ray release. However, the slow creation of a midnight movie fandom would have robbed the movie of much immediate impact and acclaim. It Follows is a potent combination of smart storytelling, craftsmanship, and some of the greatest thrills in a horror film this decade; it deserves recognition now.

The movie centers around a group of teenagers living an idyllic suburban life, until college student Jay (Maika Monroe) is kidnapped by her boyfriend Hugh (Jake Weary) after they have sex for the first time. Hugh reveals to her that, by having sex with him, he has passed along a curse. She will be stalked by a monster that only she can see. It follows its intended victim, walking behind until it catches and kills them. If Jay has sex with someone else, she will pass the curse to them, but it will return once that person is killed. Hugh leaves her with one final warning, "Never go into a place with only one exit. It's slow, but it's not dumb." What follows is 90 of the tensest minutes I have spent in a movie theater.

Unlike the vast majority of films labeled as horror pushed upon American audiences, It Follows doesn't rely on constant jump scare, gratuitous gore, or an abundant supply of kills. The monster takes the forms of mundane people, assuming the appearance of Jay's friends, a gigantic man, elderly woman, and many others. Its steady pace and focused stare are far more startling than heaps of makeup and prosthetics. The scariest element of the film is derived from its conceit. Jay can never truly escape the thing stalking her. The best she can do is divert its attention temporarily or run far enough away to buy herself a reprieve. Tension never leaves the frames of It Follows once the chase begins though. It is somewhere and it is always approaching, never slowing or relenting.

That is what allows scenes without a single appearance from the monster to be just as frightening as those in which it manages to claim a victim. Director David Robert Mitchell places the audience firmly in Jay's shoes, leaving them to ponder along with the heroine where it may be at any given moment. Scenes in bedrooms and closed doors grate like nails on a chalkboard. The question of where it is at any moment lingers anytime space is obscured from sight.

Mitchell is not interested in special effects or flashy camera work though and remains an understated presence within the film. The scenes are exceedingly well blocked and edited, allowing the group of young actors to portray the story in a world that doesn't quite feel like a movie (the lack of cell phones even provides it a timeless quality). None of the stars is over the age of 25 making what they accomplish together all the more impressive. Despite their youth they manage to portray compelling arcs in only 100 minutes. Innocence, trauma, experience, and grief are all brought to life in this stirring collection of performances.

Disasterpeace's score plays upon those expectations and questions perfectly. Drumbeats and electronic effects repeat in the same unrelenting rhythm as the monster's steps. Even when the teenagers have fled far ahead of the beast, it flickers in the background of the film to remind viewers of the approaching horror. During the tensest chases of the film, both white noise and synthetic melodies are quickened and increased in volume to remove any possible remaining sense of calm. The craftsmanship present in the soundtrack is a microcosm of the care and effort found throughout the film. Scares and drama land because the crew creating them are not only dedicated to doing their best, but have the skills to craft something truly special.

All of that craft is built around an incredibly strong core. It Follows isn't just a scary movie, it's a damn smart film. Just like its antagonist the movie will follow you out of the theater and linger in your thoughts because there's plenty to think about. The curse itself is an obvious play on the transfer of an STD moving between people during sex and never being fully removed. That's not the core of the concept though. STDs and teenage sexual discovery open the door into a much broader and timeless set of themes.

It is no accident that It Follows is almost entirely focused on teenagers. Being a teenager is already scary and for good reason. Teens occupy the strange no man's land between childhood and adult responsibilities in which most of us learn what it means to accept the latter. Death, sex, and love all begin to gain their meaning in this time, as we recognize that life always ends the same way. Jay and her friends are not only fleeing from a monster, they are learning to accept the inevitability of death and how to cope with this new understanding.

Like the xenomorph in Alien or the shark in Jaws, this monster is so much more than the plot summary on wikipedia allows. It is a representation of existential dread and a nihilistic universe. The fears it induces within us come not only from the carnage it wreaks, but what it reveals about the lives we are already living. Comparing It Follows to those two classic films is high praised, and it is entirely earned. Like its forebears in inducing a fear of the unknown and inevitability of death, It Follows demands discussion and dissection in order to be fully appreciated.

It Follows is a movie that will walk right out of the theater with you. It may even cause your heart to race briefly when you see a stranger walking slowly in your direction for the next several days. Those thrills alone are worth the ticket, but its not why you should see It Follows before it leaves the big screen. Mitchell, along with his craft and crew, have crafted an entertaining tale that burrows directly into the heart of our greatest collective existential fears. It Follows offers a glimpse in the rearview mirror to recognize why we can't stop moving, even if the ending will always be the same.