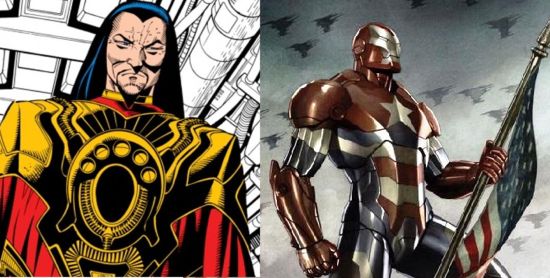 It's been a big week for Iron Man 3 villains. First, Comicbook.com broke the news that a source close to the production had revealed that the Mandarin would be a villain in Iron Man 3. Next, to the surprise of pretty much everyone, Iron Man 3 set photos leaked out that showed Iron Patriot would also be a villain in Iron Man 3. It's curious that after sealing up a public shoot in the middle of downtown Wilmington tighter than Fort Knox that filmmakers then decided to bring a previously unrevealed villain out in broad daylight for the enjoyment of the paparazzi. Or maybe it's not so curious. After it was announced that Disney was partnering with Chinese production company DMG and part of Iron Man 3 would be filmed in China, there was much speculation about what this meant in regards to the Mandarin. On the one hand, filming in China would make perfect sense for the Mandarin as a villain. On the other hand, how would it ever fly with Chinese censors? The Chinese government is well known for censoring anything that is perceived as negative toward China in films that play in their country. A recent article in the Telegraph even revealed that Chinese censors removed the scene in Men In Black 3 where evil aliens disguised themselves as Chinese restaurant workers. If China is going to censor aliens pretending to be Chinese, what hope would there ever be for a villain like the Mandarin to get approved by Disney's Chinese partners? Well, here's one way. In the Telegraph article, Robert Cain, who is a partner in a company specializing in Chinese productions, revealed "there was room for negotiation with the censors, particularly if a film was more nuanced and if there was a balance between good and bad Chinese characters." And therein might lay the secret to how Mandarin can be in Iron Man 3 and why Iron Patriot suddenly popped up. Even thought Iron Patriot is decked out in the colors of the United States flag, he is a villain in the comic books. The idea of the American Iron Man fighting the evil Chinese Mandarin would probably never make it past Chinese censors. However, the idea of the American Iron Man working side-by-side with good Chinese characters to fight international baddies from multiple nationalities could fly. In fact, what better way to create balance and show that the Mandarin isn't being singled out as a Chinese villain, then by introducing another villain draped in the colors of red, white, and blue. It's all about balance after all.