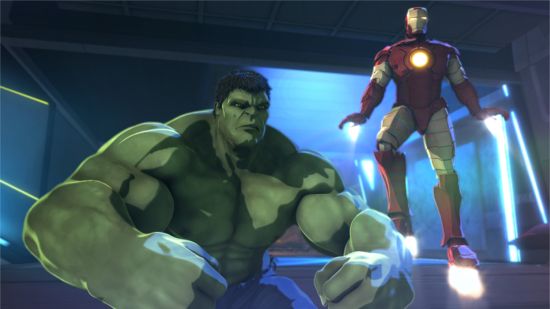 Marvel Animation Studios has released the first clip for Marvel's Iron Man & Hulk: Heroes United, which is their first full-length, direct-to-video CG animated feature. In the animated film, Adrian Pasdar is the voice of Iron Man and Fred Tatasciore is the voice of the Hulk. When two HYDRA scientists try to supercharge a Stark Arc Reactor with Hulk's Gamma Energy, they unleash a being of pure electricity called the Zzzax - and he's hungry for destruction. Together, Iron Man and Hulk are the only force that stands in the way of the Zzzax's planetary blackout. But first the Super Hero duo will have to get through snarling Wendigos, deadly robots and the scaly powerhouse, Abomination. Eric Radomski (TV's "Marvel's Ultimate Spider-Man," "Batman: The Animated Series") is Supervising Creative Director of "Marvel's Iron Man & Hulk: Heroes United," with Leo Riley (TV's "Mad," "The Ricky Gervais Show") serving as Supervising Director. Executive Producers are Alan Fine (Marvel's The Avengers, Thor, Iron Man 2), Dan Buckley (TV's "Marvel's Ultimate Spider-Man," "Marvel's Avengers Assemble," "Marvel Hulk and the Agents of S.M.A.S.H.") Joe Quesada (TV's "Marvel's Avengers Assemble," "Marvel's Ultimate Spider-Man") and Jeph Loeb (TV's "Marvel's Agents of S.H.I.E.L.D."). Written by Henry Gilroy (TV's "Animatrix," "Batman: The Animated Series," "Batman Beyond") and Brandon Auman (TV's "Iron Man: Armored Adventures," "The Avengers: Earth's Mightiest Heroes") "Tony Stark is a man who thinks first and then acts second. He surrounds himself with technology and builds himself a suit of armor and any kind of tool and weapon that he needs. On the other side is his sort of polar opposite, and that's the Hulk, who acts first and contemplates his actions later. He believes that the best way to handle things is through SMASHING. We're talking about a character whose tremendous power comes from who he is without any kind of enhancements through technology," said Executive Producer Jeph Loeb. The principal antagonist in the film is long-time Hulk enemy Zzzax. "We're very excited because this is the first time that we've been able to do an entire storyline centered around him," said Loeb. Other villains featured include the scaly green monster Abomination, a creature with twice the strength as Hulk, and the Wendigos, massive, fur-covered humanoid beasts with fangs and razor sharp claws. Just like with Marvel Studios movies, Marvel's Iron Man & Hulk: Heroes United will offer a little something extra after the credits. "I can tell you that, as Marvel fans know, it's always worth staying until after the credits and that holds true even on this made-for-DVD," said Loeb. Marvel's Iron Man & Hulk: Heroes United is available only on Blu-ray, DVD and Digital platforms on December 3, 2013.