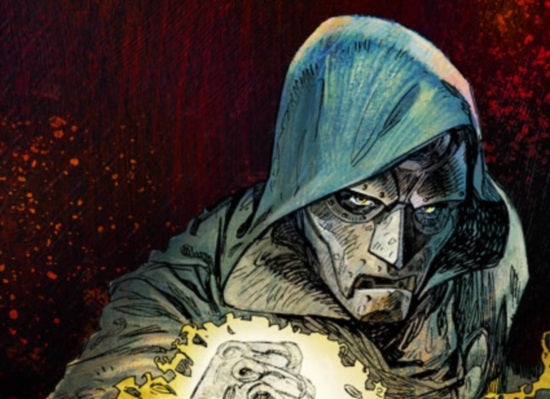 It was about a month between when images of The Thing leaked from Simon Kinberg and Josh Trank's Fantastic Four reboot and when word started to circulate that it was in fact genuine.

UPDATE: Apparently I'm the last person on the planet to find out that the "confirmation" Josh Trank gave via Twitter last week was bogus and also not Trank. I've still heard from others I trust that the photo is on the level, but please excuse the fact that this story originally said that the image was verified.

Will that happen with Doctor Doom as well?

Some new images purportedly from the set of the film have leaked online at Geek Pride, showing what seems to be a pre-viz Doom squaring off against a pre-viz version fo The Thing with, in at least one shot, a pre-viz Human Torch's hand glowing on the edge of the frame.

In other words, nothing looks all that great or polished yet, but it does give -- at least in the mask and hood -- an idea for what kind of Doctor Doom we're looking at.

In the interest of legality (they were handed off to Geek Pride by an anonymous source and so we cannot know who owns the copyright to the images), you can navigate over there to see the full batch of photos.

Assuming it isn't a stunt performer, that would be Dawn of the Planet of the Apes actor Toby Kebbell as Victor Von Doom.

Kebbell will join Miles Teller, Kate Mara, Michael B. Jordan and Jamie Bell in the reboot that started filming in May and has already wrapped principal photography.