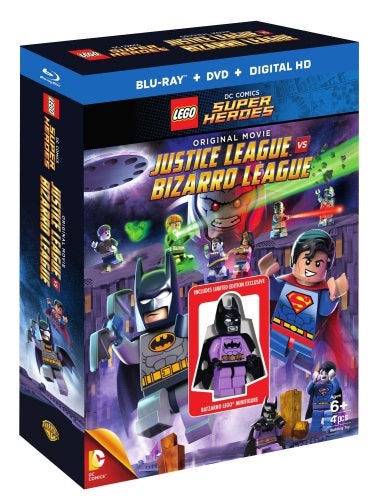 DC Comics is building another world onto its Lego Universe, though it's going to be a little bizarre.

Lego website The Brickfan reports that a new Lego DC Comics Superhero film, Justice League Vs. Bizarro League, is slated for release early next year. As one could surmise from the title, the World's Greatest Superheroes will square off against Bizarro-World versions of themselves. The box art indicates that Superman, Batman, Wonder Woman, Cyborg, and Guy Gardner Green Lantern will comprise at least part of the League. Interestingly, this will serve as Garnder's debut in a Lego movie. And while the the Bizarro League will be the film's main antagonists, the box art reveals that Darkseid will also play a part.

As an added bonus, the Blu Ray and DVD combo pack will also come with a Batzarro Lego figure. Batzarro is Batman's Bizarro World counterpart, first appearing in Jeph Loeb and Ed Mcguiness' "Superman/Batman" 2006 story arc "Vengeance." The character has only made one other appearance since then, in 2007's "Infinite Halloween Special #1."

Justice League Vs. Bizarro League is set to release on February 10, 2015. No price has been given.