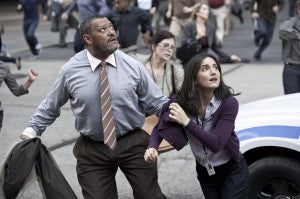 Now...this one is confusing. Not long ago, Warner Bros. started to release their Man of Steel tie-in books, and one such book referred to the character played by Rebecca Buller as "Jenny Olsen." That's been the rumor for a while now, ever since that name showed up on IMDb, and many fans immediately jumped to the conclusion that Jenny was a gender-swapped version of longtime Superman supporting character Jimmy Olsen. Later rumors debunked that claim, although Warner Bros. and the filmmakers have yet to comment on the character at all. The book appeared to be the first official recognition of her role, and drew some attention online. Who, fans asked, was Jenny Olsen? Well, for starters, she isn't Jenny Olsen. 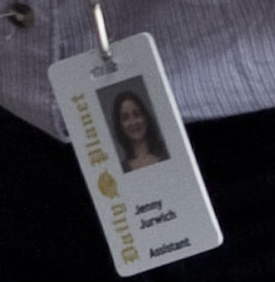 We're not quite sure how this will play out, or how it lines up with the previously-released item from Warner Bros., but that same photo has been released in high resolution and, when you zoom in, you can see that her Daily Planet ID doesn't refer to her as Jenny Olsen, photojournalist, as many fans have been expecting. It doesn't even identify her as Jenny Olsen, but rather Jenny Jurwich, Assistant (presumably to Perry White, the only person with whom she's been seen in a bunch of shots). The metadata embedded in the photo by Warner Bros. simply calls her "Jenny." There is no Jenny Jurwich in the comics or other Superman mythologies such as the films, Smallville, etc., that we're aware of and a Google search for the name turns up only a handful of fans on scattered message boards who have noticed this image, nothing else. This isn't the first time that there's been some identity confusion in the Olsen household. On Smallville, actor Aaron Ashmore played Henry James "Jimmy" Olsen, a Daily Planet photographer and friend to Lois and Clark. Over the years, many fans noted that he seemed too old to be "Jimmy Olsen," traditionally known as a younger character than the rest of Superman's cast. That issue was resolved when he was killed at the end of season eight of the series; it was later revealed that Jimmy had a younger brother named James Bartholomew Olsen, who would turn out to be the Jimmy Olsen with whom fans are familiar. It's theoretically plausible that, like Talia al Ghul in The Dark Knight Rises, Jenny has been given a false name to throw fans off the "scent." It's hard to imagine what purpose that would serve, though, to TELL everyone the character is a familiar name when in fact the "surprise" is that they're nobody special.