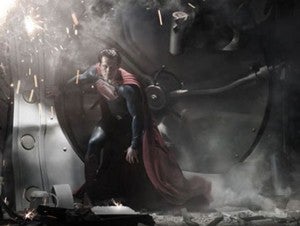 Sidestepping an interviewer's implication that a Man of Steel sequel has already been greenlit, the film's star told her that if there were a sequel, he joins everyone else in assuming that Lex Luthor would play a role in the story. "If all of this does go ahead and Lex is one of the villains--which I would assume considering the references in the move he will at least have a presence at one stage or another, I think it would be very interesting, yes," Cavill said, adding that he would put in a word for John Hamm for the role on behalf of the interviewer. Regarding the actual status of the sequel, Cavill reiterated (when she once again assumed that it was greenlit) that he's not yet sure what the status of a second Man of Steel is, and told the interviewer, "Don't believe everything you read on the Internet." Except this, of course, because you can see the video below and be confident that we're quoting him right.