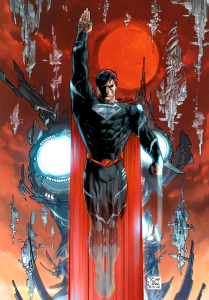 UPDATE: Concept art image removed at the request of the copyright holder.

Earlier today, we mentioned that there may be a sequence in Man of Steel in which Superman is depicted in an all-black version of his costume. Without getting into any spoilers, it seems to be one of the film's key moments, and is being played up in some of the movie merchandise for its cool imagery. At right, you can see some concept art from the film, scanned from the book Man of Steel: Inside the Legendary World of Superman and posted to a fan Facebook page, showing off what such an image of Superman might be in the film. Why's this so exciting to a percentage of fans? Well, back in the 1990s, Superman wore a black-and-silver version of his costume for a brief period of time. In the story, he had been killed and his body was being slowly restored by a regeneration chamber stored in the Fortress of Solitude. The black suit was something the Fortress robots had put on him while he hibernated/recovered/was resurrected. It was a surprisingly popular suit among fans and, probably because it was never presented as a potentially permanent change, many fans have asked to see it again and again over the years. DC has played with the concept a little bit--notably dressing Superman Prime in a caped version of the outfit during the Countdown to Final Crisis event. 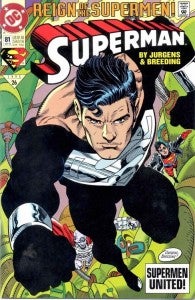 More recently, Superman was seen wearing something strikingly similar in Superman #0, the first issue by Scott Lobdell and Kenneth Rocafort and ostensibly an issue that would set the stage for things to come this year in the book. So far, we haven't seen the black suit recur in-story, although an advertisement in the back of Andy Diggle and Tony Daniel's first issue of Action Comics recently made it clear that the publisher still has plans to follow up. Could that decision have been influenced by Man of Steel's decision to use a version of that costume (which, more likely than not, means there will be toys and merchandise tie-ins)? It's not unlikely--looking at the image drawn by Daniel, it does seem as though the costume at left has at least as much in common with the Man of Steel uniform as it does Superman's New 52 duds...!