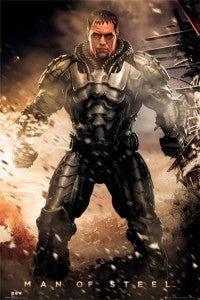 Michael Shannon, who plays General Zod in the Zack Snyder-directed Superman reboot Man of Steel in theaters this June, has lent his stage presence to a new video from Funny Or Die, in which he stages a reading of "The Insane Delta Gamma Sorority Letter." This is very, very not safe for work, due to some extreme language. Apparently, this letter, sent from a Delta Gamma to her sorority sisters at the University of Maryland, was intended to help motivate the membership toward its stated goal "to foster high ideals of friendship among college women, to promote their educational and cultural interests, to create in them a true sense of social responsibility and to develop in them the best qualities of character." Mostly it's a lot of profanity and some angry ranting about how the writer (Becca?) feels that the chapter is being put at a competitive disadvantage in the hunt for frat boys to party with because other members of the chapter are boring and/or sober. Yeah, it's pretty horrible. But Shannon makes it hilarious. Shakespearean, almost. Check it out below.

Man of Steel's General Zod is An Insane Sorority Girl