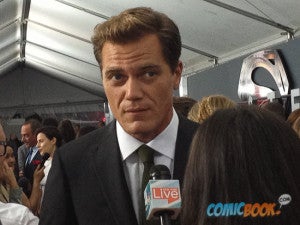 Michael Shannon[/caption] In a new interview with GQ, Man of Steel villain Michael Shannon--who plays Kryptonian villain General Zod in the movie--praised Terence Stamp, the last actor to play the role on the big screen. Discussing the challenges of making a larger-than-life dictator a relatable and believable villain, Shannon said that he tried to find a motivation for the character, taking in another direction from Stamp, who chose overwhelming force to make his point rather than persuasion. "Well, I don't think I'm gonna make anybody cry," Shannon told the magazine. "When I saw [Superman II] as a kid, Terence Stamp was just stone-cold terrifying. But you're never really sure why he's so mad. We were trying to answer that question. You may not feel bad for me, but every once in a while, you might think, He's kinda got a point." Man of Steel opens Friday.