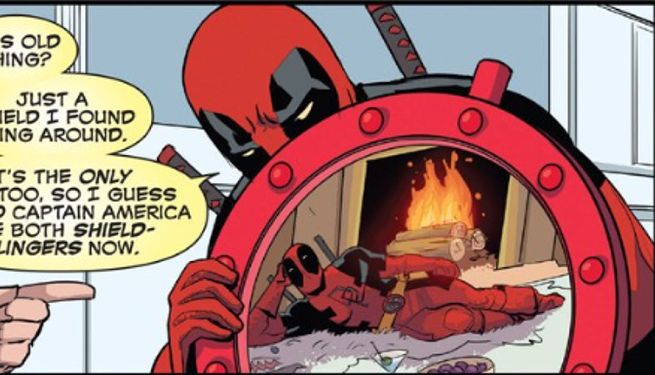 Marvel Comics' Deadpool has looked into the future and what he has seen is Ryan Reynolds' Deadpool. In the second issue of Deadpool's Secret Secret Wars released in comic book stores today, there is a homage to a familiar image that was used to promote Ryan Reynolds' upcoming Deadpool movie.

Deadpool's Secret Secret Wars is actually set in 1984. In the comic, Deadpool gazes into one of several shields, which provide him a glimpses into the future. One of the images Deadpool and Professor X see is an image of Deadpool lying on a bearskin rug in front of a fireplace, almost an exact copy of the image that Ryan Reynolds and 20th Century Fox first released to promote the Deadpool movie.

Thanks to Comicbook.com reader Sve Chilikov for pointing out the image. Deadpool is scheduled to be released in movie theaters on February 12, 2016.