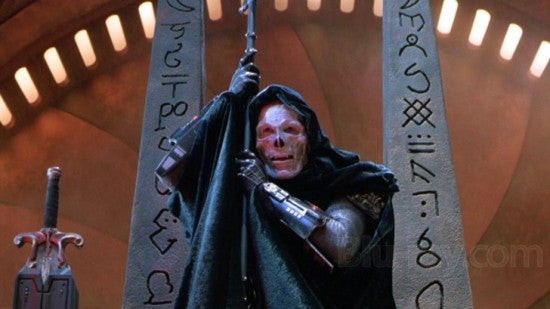 Gary Goddard, the director of Masters of the Universe and creator of Captain Power and Skeleton Warriors (among other things), has never stopped thinking about Eternia. In fact, he's still got an idea for a He-Man movie that he'd love to work on, even more than 25 years after his feature debut brought He-Man (in the form of Dolph Lundgren) to Earth. And, yes, he thinks whatever happens with the He-Man movie currently in production, that the new filmmakers need to keep Frank Langella, who played Skeletor in Goddard's version, on as the villain. In an interview with Goddard and his Phoenix Rising: The Return of Captain Power collaborator Roger Lay, Jr., Goddard said that he'd love to take a swing at the script, if the eventual director of the newest Masters of the Universe film decides he's not happy with what they've got. ComicBook.com: You directed Masters of the Universe, so what do you think of the fact that once again, that property is a going concern? Goddard: I think it's fantastic. I think they should bring Frank Langella back as Skeletor, though; there's no use going anywhere else. He is the best for that role! Lay: Gary had a great idea for how they should do Masters again. Goddard: I'm not going to say that [in an interview]; I'm not going to give that idea away! Lay: Right, but I'm saying he still thinks about that. Goddard: I have a cool idea. I think that I have a fantastic approach to that movie and if the appropriate person finally gets there, if they're not happy with the script, I've got a great idea. But regardless, I'm anxious to see what they do.