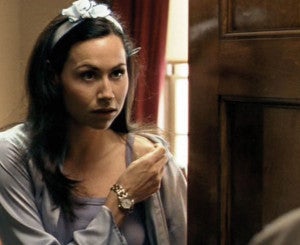 Earlier this week, comedian Pete Holmes released a "recut and remastered" trailer of the Oscar-winning 1997 film Good Will Hunting, in which co-star Ben Affleck had been replaced in every shot by Holmes as Batman. You can see the (not safe for work) video below, in which Holmes's Batman screams his way through scenes from Good Will Hunting, doing his best Christian Bale impression, in a nod to Affleck's recent casting as the Dark Knight in 2015's Batman vs. Superman. Notably absent from the trailer, though, is Minnie Driver, who played Matt Damon's love interest in the film and who doesn't appear at all in the Batman version of the trailer. She was a little bummed about that, apparently: