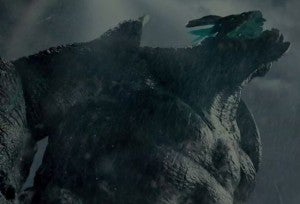 If you haven't seen Pacific Rim yet, then be warned that this article contains spoilers for what occurs during and after the credits for Pacific Rim. There had been numerous rumors suggesting that there would be a trailer or some type of teaser for Legendary Pictures' Godzilla movie, which is scheduled to be released on May 16, 2014. However, the rumors are wrong, and there is no teaser for Godzilla. There is a brief scene that takes place right as the credits first start, and there is a special dedication after the credits. As the credits first start, there is a montage of the polished models of Jaegers and Kaijus. The scene then cuts to an image of a dead baby Kaiju, which ate Hannibal Chau and was killed in Hong Kong earlier in the film. A knife comes poking out of the skin of the baby Kaiju, as someone is cutting themselves out. Hannibal Chau emerges from the baby Kaiju and says, "Where's my godd*mn shoe?" At the very end of the credits, there is the sound of a Kaiju roaring. There is also a dedication of the film to Ray Harryhausen and Ishiro Honda. Ray Harryhausen was an American visual effects creator, who passed away in 2013. He is best known for his work on such films as Mighty Joe Young and Clash Of The Titans.  Ishiro Honda is a Japanese film director, who passed away in 1993. He is best known for his work on Godzilla films.

Pacific Rim After The Credits Spoiler