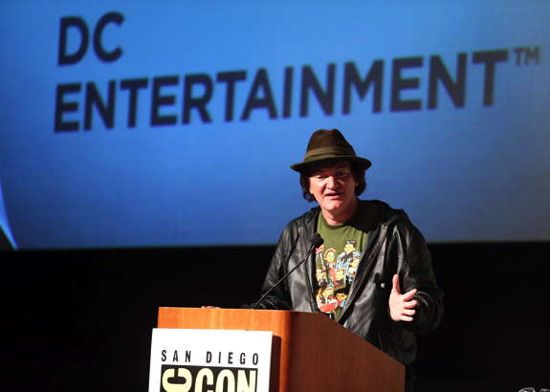 During an interview with Quentin Tarantino, the French weekly Les Inrockuptibles (via Indiewire) asked the director to weigh in on the casting of Ben Affleck as Batman in the upcoming Batman Vs. Superman movie. Why was Tarantino asked about Ben Affleck as Batman? No explanation is given, but it's pretty much a question that apparently everyone associated with Hollywood will face at one point or another. While Tarantino didn't really have an opinion on the recent casting news, he did have some other opinions on Batman, which are likely to prove controversial. "I have to admit that I don't really have an opinion," said Tarantino. "Why? Because Batman is not a very interesting character. For any actor. There is simply not much to play. I think Michael Keaton did it the best, and I wish good luck to Ben Affleck. But, you know who would have made a great Batman? Alec Baldwin in the '80s.'" While many might argue Christian Bale did Batman better than Michael Keaton, most would probably agree that Keaton did a great job. And while Alec Baldwin might seem like an unusual choice, he was reportedly in the running to play Batman back in the eighties. However, the comment that will likely raise the most eyebrows is Tarantino's claim that Batman is not a very interesting character. Maybe, something was lost in the translation, but most would argue as far as superheroes, Batman is one of the most interesting characters ever.

Quentin Tarantino Says Batman Is Not A Very Interesting Character, No Opinion On Ben Affleck Casting