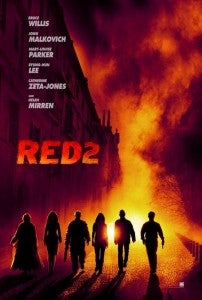 In a new interview with Collider, Red 2 producer Lorenzo di Bonaventura went into some detail regarding the tone and feel of the upcoming Lionsgate sequel based on the comics from Warren Ellis and Cully Hamner. Director Robert Schwentke, who handled the first Red but left the franchise to take on the trouble R.I.P.D. adaptation at Universal, helped steer the first movie into a unique film that you can't duplicate, the producer said. "I think we all loved the tone of it, but I don't think you can replicate tone. You can come close, but we also have a different director so he's going to have a slightly different version of this thing," di Bonaventura told Collider. "But, what we describe as tone for that movie is all the characters are playing it very straight while outrageous, fun s--t is going on. So we are maintaining that tone. Dean [Parisot] has a different sense of humor than Robert [Schwentke] so there's certain kinds of things that are a different funny, you know, different kinds of actions are happening. So it will be a different movie and it will be a new experience for everybody, but also our hope that we retain the thing that everybody digs about it because that's what we dug about it too." He went on to sing the praises of incoming director Parisot's previous work, most notably the cult favorite Galaxy Quest, which di Bonaventura said is what made up his mind that Parisot was right for the film. "[I]n some ways when you think about the tone of that film, it's very similar to this, because those characters are in an outrageous plot, but they take it utterly seriously," the producer said. "We looked at that movie—it was interesting, when we were talking to directors about the first one, Robert came in and articulated the tone we were going for even though we probably could have articulated it as well, but we kind of instinctually knew what we were trying to get. But, Robert immediately articulated it. Galaxy Quest is a very similar tone so, you know, we knew." He also praised Parisot's work as a director on the TV series Justified, saying that it had a similar sensibility of outrageous characters and situations, who took their threats gravely seriously.