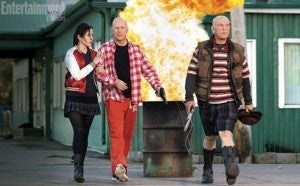 The first official still from Dean Parisot's anticipated comic book movie sequel RED 2 has hit the Internet, thanks to Lionsgate and Entertainment Weekly. The crimes against fashion on display here alone suggest that, in spite of trading up directors, the film will hang onto the tone and look of the first movie, based on the comic book series by Warren Ellis and Cully Hamner. "All of those great Bond and Bourne movies you've seen, we go into that world and have those kind of set pieces. It's just our characters that are completely ludicrous," Parisot told EW. Of Helen Mirren, the director says she'll be the star of the show. ''She is genius and unbelievably sexy — and somehow unbelievably macho.'' RED 2 will be in theaters on August 2. It features returning stars Bruce Willis, Mary Louise Parker, John Malkovich and Mirren but will add Thor's Anthony Hopkins to the mix this time around as well.