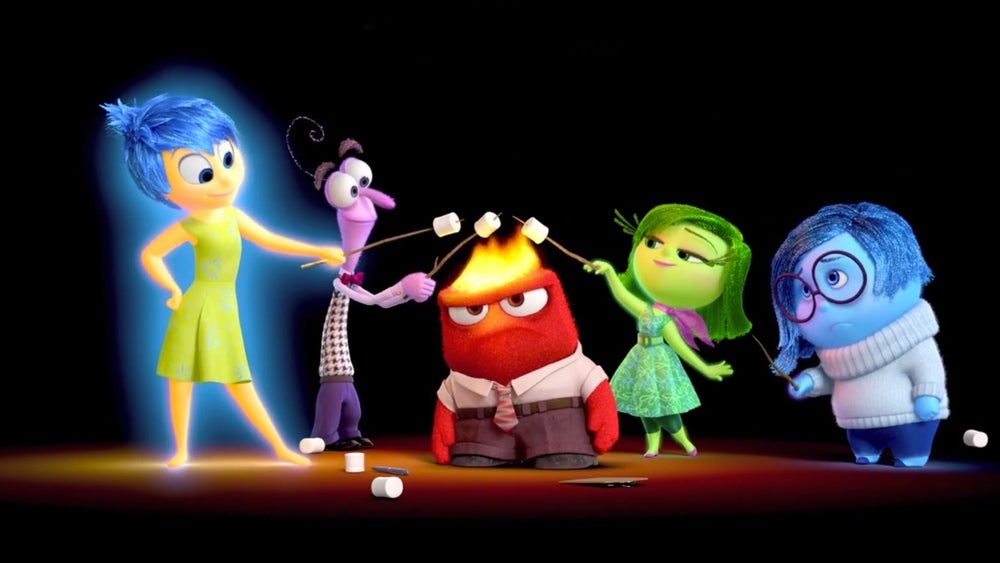 Inside Out, Pixar's newest animated feature, is a return to form after a five-year slump for the studio. Directed by Pete Docter, the movie continues to exam the themes found in his other films, Monsters Inc. and Up. It is a movie about childhood, maturation, and finding happiness in spite of the misery that comes with living. Inside Out is every bit as good as both Docter's predecessors, if not better. It is, without a doubt, one of the best films of 2015.

The movie focuses on Riley, an 11 year old girl who is moving with her parents from Minnesota to San Francisco. Riley is as much the setting of the film as she is the main character, as most of the action plays out inside of her head between her five anthropomorphized emotions: Joy, Sadness, Fear, Disgust, and Anger. Together these five must help Riley remain happy in the face of big changes.

It is a fantastical set up requiring a lot of world building, and Docter effortlessly constructs Riley's mindscape in the first 10 minutes of the film. Far more importantly, he does so without bogging down the story in exposition. Rather than explain the purpose and identity of these emotions, and their place within the larger expanse of Riley's head, he shows the audience all of this as Riley grows up. The audience is taken on a journey, one just as notable as the breathtaking opening sequence of Up, from her birth to the move. Everything important is introduced naturally along the way. It is a showcase in storytelling economy and function. Again, this is only the first 10 minutes of the movie.

While the basics of the story are set up there, the characters continue to explore this fascinating world throughout the entire length of the film. The wonders to behold are seemingly endless, and display a great deal of imagination (sometimes quite literally). It's the sort of place you would be happy to get lost within, if you were not so concerned with what was happening on screen.

And you will be deeply invested in what is happening. Docter has a superb grasp of establishing stakes. By making his main character the entire world of the film, and using the first ten minutes of the movie to make her a fully envisioned character with real dreams, worries, and loves, it's impossible to not avoid caring about what happens to her. The stakes of Inside Out are a young girl's happiness, and they are so much larger and more important than a fight to save the world from a rogue A.I. or rescue tourists from resurrected reptiles.

The journey also provides plenty of lush visuals for audiences to revel in. Writers Docter, Meg LeFauve, and Josh Cooley provide some very clever gags, some of which may fly over younger viewers heads like a reference to Chinatown, but they are plentiful and short enough that they don't affect the pacing of the movie. The real highlights come in the various places that must be visited along the way. A space for abstract thought takes full advantage of the animated form, providing one of the most imaginative sequences in any Pixar film to date.

The emotions within Riley's head are just as well formed as the setting itself, specifically Joy and Sadness. What could have been a collection of one-note jokes are just as well realized as Riley herself. They are not heroes or villains, but people striving for the same goal the audience has: to see Riley happy. It's the same fusion of character, stakes, and drama that serves as the heart of all of Pixar's masterpieces.

Those little feelings are well written, but the voice actors, along with the incredible team of Pixar animators, really bring them to life. Joy (Amy Poehler) and Sadness (Phyllis Smith) are the emotional core of the film (pun really not intended). Their journey together involves growth on both sides and a potent series of role reversals. Poehler and Smith are brilliantly cast, truly embodying the characteristics they are meant to. Yet as the film goes on and they push themselves beyond the comfortable roles that they begin in, both capably adapt without breaking character. Their animated body language is spot on as well, often showing more about their thoughts and intentions than could be said.

Lewis Black as Anger is the most perfect casting choice of the film though. His stand up routine has positioned him as America's angriest man, but it's an anger that comes with both a sense of humor and genuine care. The rage is not off-putting, but comes from a place of concern that makes his hot-headed attitude endearing. Richard Kind reminds everyone of his skill as a voice actor as well. He plays one character that the less said before experiencing Inside Out, the better though.

Inside Out is not just Riley's, or Joy's, or Sadness' movie. It's a movie that cares about all of its characters, and ensures the audience does as well. The result is that every scene is propulsive and consuming, making the experience fly by. It's also not concerned with making the solutions easy. It pulls children and grown adults alike to the edge of their seats (most likely shedding a few tears too), rooting for these anthropomorphic emotions to make one fictional little girl happy.

And in the end, it gives both these characters and the audience what they need, which is an entirely different matter from what they want. Docter isn't interested in talking down to his audience, and doesn't provide an easy message or parable. What happens is something much closer to real life. It's complicated, as complicated as anything you'll find in an all age's film, and the experience is all the more rewarding for it.

Inside Out reminds us that life is hard, full of constant change, and events that don't always make sense. But it also helps us remember that we're alive, and why that is such a wonderful thing. It's a movie that reminds people of all ages why we go to the movies, and why we keep going.

REVIEW: Inside Out Brings Nothing But Joy