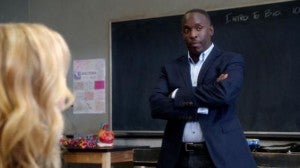 Michael Kenneth Williams, who has put in time on HBO's The Wire and Boardwalk Empire in addition to NBC's cult-hit Community, will head to Detroit to act as the partner to Alex Murphy, better known as RoboCop, in the new reboot of the franchise being directed by Jose Padilha. Williams will play Murphy's partner, as-yet-unnamed, who has a close relationship with Murphy's family, according to The Hollywood Reporter. That's obviously got a lot of story potential in a movie that revolves around Murphy being killed in the first act. Starring Joel Kinnaman, star of the just-cancelled AMC series The Killing, alongside Hugh Laurie,  Samuel L. Jackson, Gary Oldman, Jay Baruchel, Abbie Cornishand Jackie Earle Haley, RoboCop is due in theaters August 9, 2013.