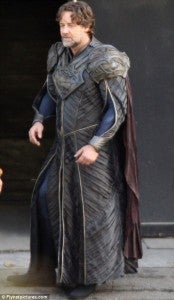 has obtained photos of Russell Crowe, playing Jor-El on the set of The Man of Steel, and they're now making the rounds of the Internet. A few more shots are available at the link above. Their clever headline, meanwhile, spearheaded a number of comment threads talking about the fact that Crowe is smoking in the outfit. Seriously, though, well-played, Daily Mail. Besides the fact that the images were taken while he was reportedly filming a scene with Karl Urban (General Zod), the look of Jor-El says a little all by itself about the way Krypton is being handled in the upcoming Superman reboot. The Kryptonian uniform, the S-shield and the beard all point to an approach similar to what Geoff Johns used in Action Comics (an approach echoed, a bit, in the last few seasons of Smallville).

Russell Crowe is Smoking as Superman's Dad in Man of Steel