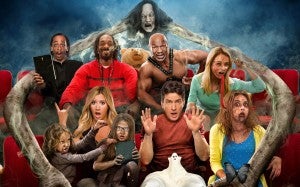 Replacing Anna Faris with Linsday Lohan and Regina Hall with Charlie Sheen did little to help Scary Movie 5, as the latest installment of the horror-comedy franchise from The Weinstein Company tanked at the box office today, putting it on a pace to make about a third of what Scary Movie 4 did in its opening frame. The film, which is still on pace to come in second at the domestic box office this week, will make about $13.4 million, down from just over $40.2 million for the fourth film back in 2006. A failure like that after a seven-year wait is likely enough to shelve the whole franchise, although it's difficult to speculate what effect the ancillary tie-in films like Date Movie, Disaster Movie and other non "Movie" names like Vampires Suck have on keeping the premise afloat. The other side of the box office coin this week is the only non-animated, non-genre film in the top six; 42, which dramatizes Jackie Robinson's quest to integrate Major League Baseball, is overperforming this weekend, on pace to make $26 million up from estimates in the mid-to-high teens. The film stars Harrison Ford, who's going to be busy over the next couple of years. Even if he doesn't end up in Star Wars Episode VII, he's got Anchorman 2 and Ender's Game on the horizon. The Evil Dead, The Croods and G.I. Joe: Retaliation are on pace to round out the top five, although they're all between $2.9 million and $3.2 million for Friday night, meaning that they're tracking so close together that any one of them could move up or down the list. Jurassic Park's 3-D reissue should come in at #6, as it opened with $2.4 million Friday and it would take a big jump to overtake the others.