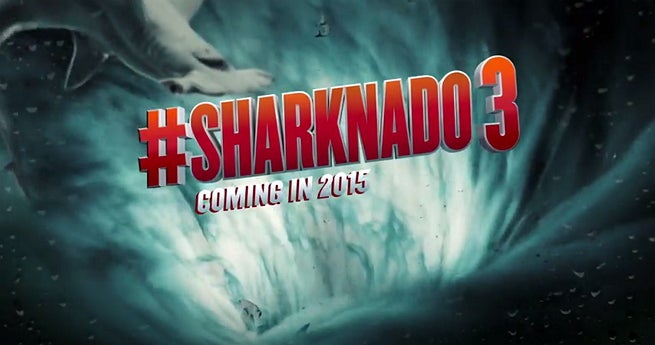 Sharknado 3: Oh Hell No! will air in 86 countries, including the UK, Australia and others across Europe, Asia and Latin America - when it premieres in international primetime within 24 hours of the United States debut.

"We wanted this third title to boldly go where no shark movie has gone before," said Chris Regina, Senior Vice President, Program Strategy, Syfy said in a press release "Sharknado 3: Oh Hell No! embraces the larger-than-life irreverence that has made these movies so popular and entertaining."

"The sharks and tornadoes get all the glory, but we would like to thank our long-time marketing guru Mike DiGrazia who first suggested 'Oh hell no!'" said David Michael Latt, Producer, The Asylum. "A dedicated fan of the genre, Mike created the tag lines for 1 and 2 – 'Enough Said!' and 'Shark Happens' – as well as the Sharknado posters, including the original, which was a viral sensation on its own."

Additional cameo roles include Mark Cuban as the President of the United States; Ann Coulter as the Vice President; Michele Bachmann as herself; Jerry Springer as Mr. White, a manic tourist; Washington Redskins tackle Tom Compton as a reporter; *NSYNC singer Chris Kirkpatrick as a pool lifeguard, and Chris Jericho, who will portray Bruce the roller coaster ride operator.

Anthony C. Ferrante will direct, based on an original screenplay by Thunder Levin. Sharknado 3 is a production of The Asylum.