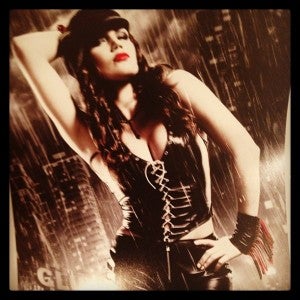 Crystal McCahill, Playboy model and reportedly one of the actors in Robert Rodriguez's upcoming Machete Kills, today tweeted a series of images of herself on the set of the upcoming Sin City: A Dame to Kill For, in which she says she' splaying an unidentified role. "What a fun day shooting! Can't wait to say what it was for! But I have to," she tweeted. Later, she added, "Getting hair and make up done for my part with Mickey Rourke in Sin City 2," with a link to one of the images below.Later still, she tweeted two images of herself in costume, one of which appears to be a promotional shot. While the casting of Ava Lord, a role originally earmarked for Angelina Jolie, who committed but then had to back out, is still up in the air, the smart money appears to be on McCahill being one of the prostitutes in Old Town. [gallery link="file" order="DESC" columns="2" orderby="title"]

Sin City: A Dame to Kill For To Feature Playboy Model Crystal McCahill