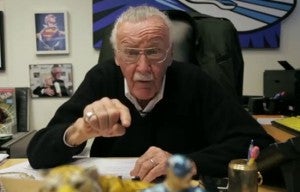 Iron Man 3 is one of the most controversial movies that Marvel Studios has ever released. While Iron Man 3 will likely be the box office champion of 2013, many longtime comic book fans were upset by what is known as the Mandarin twist. Now, Marvel legend Stan Lee has come forward to issue a public apology in regards to Iron Man 3, but it's not for the reason that most fans might suspect. In a Youtube video, Stan Lee said, "You know something gang, this is the first time I have issued a public apology, and it has to do with the Iron Man movie, the new one." Stan Lee added, "I'm apologizing for a situation that came up regarding my cameo. My cameo had a couple scenes in it that were as funny as hell. The movie ran a little bit long, and they had to cut my cameo in half." Before Iron Man 3 came out, Stan Lee had talked up his Iron Man 3 cameo as being his funniest cameo yet, but he didn't realize they "had cut the funny part out." What viewers actually saw in Iron Man 3 was a brief scene of Stan Lee as a beauty pageant judge, holding up the number 10. It was a nice nod to the Marvel legend, but hardly as funny as some of his other cameos. In closing, Stan Lee said, "It's not my fault really. I had nothing to do with it."