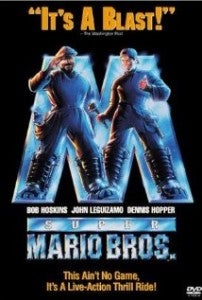 Remember that live-action Super Mario Bros. movie? Oh, you do, and now you're angry at me for making you? Well, press on, because there's more! Remember how at the end of the film, Daisy showed up and hinted at a sequel that never happened? Well, now it has.

Comic book creators Steven Applebaum and Ryan Hoss met with the writer of the original film to hash out a comic book sequel titled Super Mario Bros. 2: The Comic, picking up from actual story elements the writer intended to use for his sequel. Check out the comic's website here, if you like the sample page at left.

Super Mario Bros.: The Movie Gets a Comic Sequel