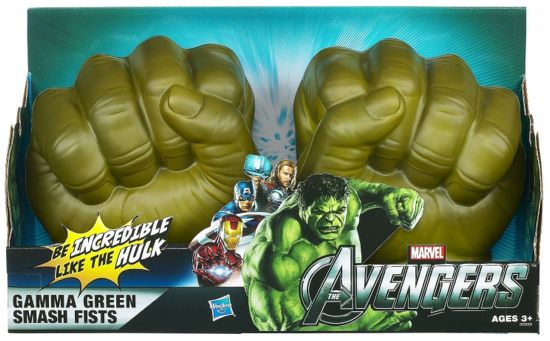 As the highest grossing movie of the year, The Avengers will probably make a lot of lists compiled for the year 2012. However, the team has just made one list that they probably didn't want to be on. The Avengers Gamma Green Smash Fists is included on the 10 Worst Toys of 2012 list. The list has nothing to do with how fun the toys might be to play with, but it is a list focused on toy safety. The 10 Worst Toys list is put out annually by W.A.T.C.H., which sounds like an acronym that you might find in a Marvel comic book. W.A.T.C.H. stands for World Against Toys Causing Harm. According to W.A.T.C.H., the 10 Worst Toys list nominates toys with the potential to cause childhood injuries, or even death. In regards to the Hulk Smash Fists, W.A.T.C.H. says the potential hazard is for blunt impact injuries. W.A.T.C.H. notes, "These oversized fists, resembling those of a popular Marvel comic book and movie character, are sold to enable three year olds to 'be incredible like The Hulk' by 'smashing everything that gets in [their] way!'  No warnings or cautions are provided."