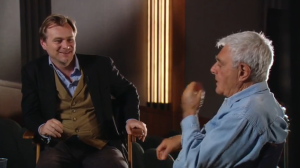 Taken from the special features on the newly released Dark Knight Trilogy Ultimate Collector's Edition, filmmakers Christopher Nolan (The Dark Knight) and Richard Donner (Superman: The Movie) sit down to talk about the process of coming up with the (thus far) definitive big-screen versions of the iconic heroes left in their care. In the one-minute clip below, the pair talk about scoring the films, with Donner saying that John Williams's famous score was completed after the movie was almost done, and that his temp score sounded so much different that at first he was concerned Williams's music wouldn't work the same way onscreen. For Nolan's part, he revealed that until composer Hans Zimmer was done with his score, the Batman films were shot without music, so that he didn't get too attached to something, or unconsciously edit around something, that wouldn't sound the same as Zimmer's score and so would make the film not quite fit with the music. Check it out below.