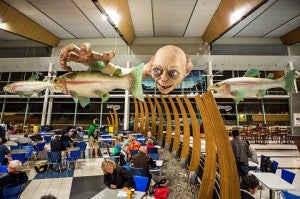 Filmmaker Peter Jackson makes a cameo appearance alongside  dozens of denizens of Middle Earth in a new safety video meant to be screened on Air New Zealand flights, but which has already racked up millions of views on YouTube. The video, embedded below, plays up the fact that New Zealand has been Jackson's choice to depict the mythical landscape of J.R.R. Tolkien for six films now. Says the YouTube description,

"Air New Zealand partnered with WETA Workshop on a brand new Hobbit inspired Safety Video. It features cameo appearances including Sir Peter Jackson. Visit https://www.airnzcode.com/hobbitmovie to Find and Unlock the Elvish Code for your chance to win one of six double passes to the World Premiere Screening of The Hobbit: An Unexpected Journey in New Zealand on the 28th of November 2012"