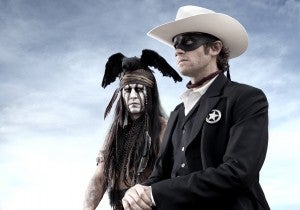 While the titular star of Disney's The Lone Ranger, Armie Hammer, is signed to a three-picture deal for the franchise, the man on all the movie posters--sidekick Johnny Depp--is committed only in principle, and hasn't signed a new deal for further films, E! Online reports. That doesn't stop "Tonto" from saying he'd be eager to take on a sequel--but it does mean that if the film is a surprise hit (so far most analysts are predicting it will be a bomb, but they said that about World War Z, too...), signing Depp for more could be pretty costly (think back to the recent negotiations with Robert Downey, Jr. after The Avengers happened). "I think it was a one-shot deal," Depp told E!, adding, "If they started talking sequel on this I'd be ready to go in a second." Why he's not signed on for more than one film is anyone's guess, but the film has been having budget issues from day one and perhaps Disney decided that signing a big star to a multi-picture deal with money that could end up guaranteed whether or not a sequel happened was not the best use of their money at the time. Depp, who currently has two major motion pictures already on his schedule (a fifth Pirates of the Caribbean and Into the Woods), has also expressed interest in pursuing a few smaller projects so it's hard to imagine where he would fit a sequel in. Of course, if the movie turned out to be a massive success other projects (like Disney's own Pirates) could be made to work with it.

The Lone Ranger's Johnny Depp "Not Officially" Signed for Sequels