Grab a friend and go see this movie. If you don't have one, hire one. 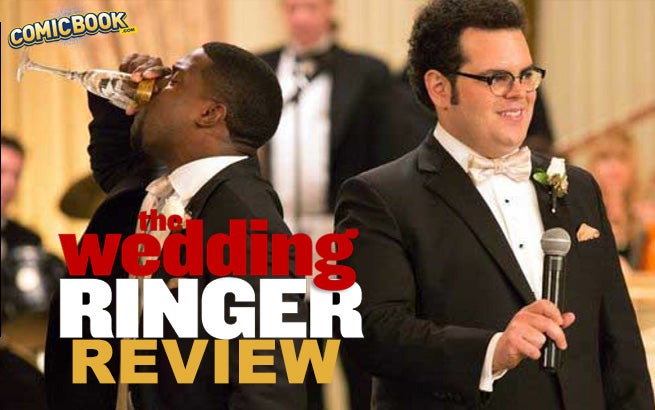 Before the opening credits even start to appear on screen, there's side splitting humor. Honestly, it made me want to attempt a Golden Tux at my own wedding (hiring a Best Man and all seven groomsmen to act like your friends), just because of how much fun it looked for Doug Harris (Josh Gad).

Meet Doug: a chubby rich guy with no friends, about to get married to the smoking hot Gretchen Palmer (Kaley Cuoco-Sweeting). His problem? He told Gretchen he has a bunch of friends and a best man… Which he has neither of.

During some dreadful wedding planning, Doug's false bravado of having pals is seen transparently by Edmundo (Ignacio Serricchio), the flamboyant wedding planner. Luckily for Doug, he's not the first groom with this problem to cross paths with Edmundo. Edmundo has a solution: Best Man Services Inc, Jimmy Callahan's (Kevin Hart) booming business that helps guys like Doug look cool at their weddings.

From here, Jimmy and Doug embark on their quest to perform the historic Golden Tux. The groomsmen are comprised of an unsightly, supremely flawed bunch of guys, but let me tell you: each one has their moment to make you laugh, and I'm not just saying that because I'm a sucker for LOST alum and got to see two of them this week (Ethan Rom (William Mapother) had a small part in Blackhat). Having Jorge Garcia in a comedy where he belongs (if we're not allowing him to develop a character like we know he can) was fantastic, but like I said, I shouldn't single him out because every single member of the group had their shining moment.

The bromance between Doug and Jimmy was a ton of fun to watch (I'm ready for a sequel). While the film was a bit predictable, let's be honest, that's not why we're watching it, and even so, I loved the story arc from start to finish. Josh Gad made me feel like I knew Doug Harris myself and at the drop of a dime could make me feel so much pity and sadness for his character, then a minute later have me smiling, clapping, and gasping for air between laughs. On top of that, Kevin Hart delivers every line with so much enthusiasm that I think he could probably speak a foreign language with no subtitles and still make people laugh.

While some jokes were a little over the top and excessive, I still found myself laughing at them. This movie is quotable and it's one that I'll buy on Blu-Ray when it comes out.

By the way, keep your eyes and ears peeled for a LOST Easter Egg in this one.

Bottom Line: The Wedding Ringer pulls off the Golden Tux. It is packed with great, well-written (and even better delivered) laughs and so much enthusiasm. The fact that it has a fulfilling story line to match is the cherry on top. 8.5/10

A lot of films hit theatres this weekend. Are you checking out the Wedding Ringer?

The Wedding Ringer Review: Stays True To Its Vows