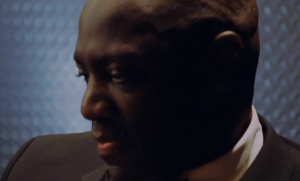 villain Adewale Akinnuoye-Agbaje told Hero Complex in a new interview that the Kurse outfit he's wearing for the film weighed about forty pounds and was mostly practical effects, describing the character as part bull, part lava creature. "It's an amalgamation of a bull and a lava-like creature," Akinnuoye-Agbaje said. "He has very animalistic tendencies but with this insatiable and unstoppable power. As an actor, that's one of the hardest things to embody. You have to realize you are probably the most powerful thing you could imagine. And you have to be that. You can't pretend, so that when you face Thor, it's real." He added, "The outfit weighed about 40 pounds. I'm sure there will be a certain amount of CGI but a good 80% was me in that suit. The outfit informed how I was going to move – the horns – his fighting style as well. It's almost like he's made out of stone." He explained a bit about the process of preparing for the role in a recent interview with ComicBook.com, in which he told us, "Really, I play two characters, sometimes in the same day, so it wouldn't just be an hour and a half; sometimes it was four or five hours in makeup. But that's all part of the process and I think that process informs the performance."

Star Wars: What's the Next Movie or TV Show After Andor?

Glass Onion: How Long Until Knives Out 3 Release Date? (Exclusive)