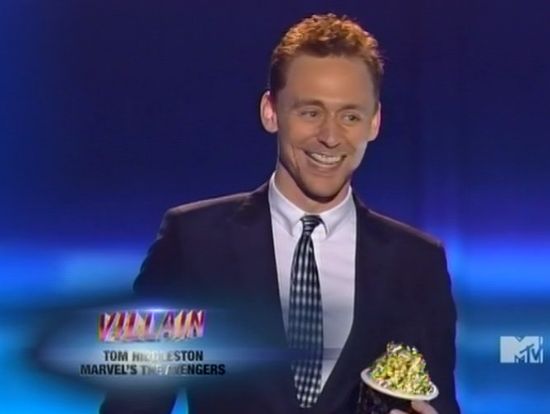 At the 2013 MTV Movie Awards, Tom Hiddleston won the Best Villain award for his performance as Loki in The Avengers. In accepting the award, Tom Hiddleston said, "I am Loki of Asgard, and I'm burdened with glorious popcorn. My goodness thank you so much. The only glorious purpose I'm burdened with tonight is a feeling of enormous gratitude to all of you and to all of you, very enthusiastic back here." Hiddleston continued, "I loved this film. I had the best time making it, and you know, obviously I'm not from this country as you can hear, but you were very hospitable to me, and I would like to thank Joss Whedon first of all. You beautiful badass, you wrote and directed this amazing film, which is kind of a cosmic dance of spinning plates and superheroes, and you danced like Fred Astaire man, you made it so easy." Hiddleston added, "Thank you, Chris Evans. Thank you to Sam Jackson. And absent friends, Scarlett Johansson, Robert Downey Jr., Jeremy Renner, my brother from another mother, Chris Hemsworth, and a special thank you to Mark Ruffalo for smacking me like a ragdoll." "Thank you, Jeremy Latcham, my very fine producer, and Kevin Feige and everybody at Marvel for letting me play this amazing iconic character in I think the most uncomfortable hat you could ever wear. And lastly I just want to thank Liam Payne from One Direction, who I believe has named his dog Loki. Now, Liam's dog Loki is unquestionable better looking, certainly better bred, and probably better known. He's already got more Twitter followers than I do, but you know so they don't know who Liam's dog is in Asgard, but it's all about spreading the love."