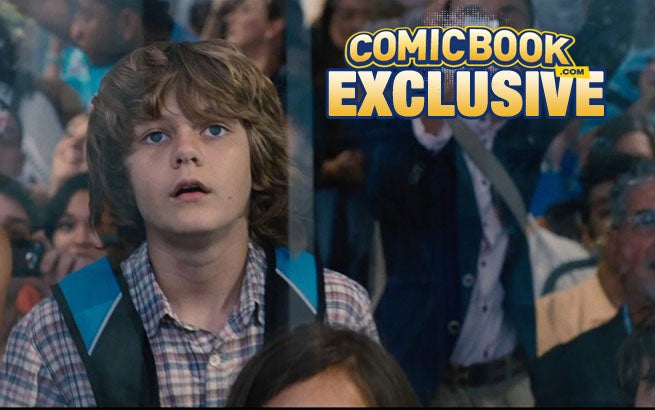 People from around the world will set sail for Isla Nublar this weekend. Jurassic World opens its gates following its deadly predecessor of 22 years, Jurassic Park. One of those guests will be Gray, played by Ty Simpkins.

Simpkins is a quickly rising star. In 2013, he played Harley opposite Robert Downey Jr.'s Tony Stark in Iron Man 3 and now he plays an energetic dinosaur fanatic alongside Star-lord actor, Chris Pratt. We caught up with Simpkins for an exclusive interview to talk about the upcoming Jurassic World and pick his brain a bit about his Marvel-ous life!

CB: After filming Jurassic World, would you ever visit a park full of dinosaurs?

TS: Definitely! I would work there if I could. I mean dinosaurs, real live dinosaurs would be amazing. I think I would want to be a park ranger so I could go all over the park. That would be awesome.

Gray is very much in love with dinosaurs when he gets to Jurassic World. Have you been interested in dinosaurs growing up?

YES! I grew up loving dinosaurs. Books, and I had all the figures. I used to set them up outside and have them roam the earth which was really just my backyard. I still love dinosaurs and I think Colin Trevorrow did an amazing job bringing the imagination and reality into out movie.

It looked as if seeds were planted for future Jurassic movies, are you signed on for additional Jurassic World sequels?

It's actually standard I think with most studios to have the actors sign multi picture deals. I did sign a 3 deal contract but I guess that just means if they made it and my character was in it I would be in another Jurassic project. I would love to do more Jurassic films. It's kind of sad that the park was trashed.

You've had the opportunity to work with both Iron Man and Star-Lord. What was your favorite thing about working with each?

Do you mean the characters or the people behind the characters? Because I actually didn't get to actually work with Star-Lord. Owen Grady was in my project. But if we're talking about people, Robert is amazing to work with. He gave so much of himself which made me want to match him and made it easy to match him. Chris is also very giving and kind of like a big brother. Both know that kids like me look up to them so I think they have to make the people they work with feel comfortable so they don't get all goofy and excited. You know, show that they are real people too. And I think they try to match what I bring so it doesn't seem weighted on one side or the other.

Who do you think would win in a fight between Iron Man and Star-lord?

Sorry Robert, I think if Star-lord had his ship he would win. But if not Iron Man would totally win and it would be a very unfair fight.

Will we see you popping up again in any future Marvel movies? Maybe Civil War?

Man, I would love to be in more Marvel films! As of right now I don't know what or if they have plans for me.

There's been a lot of fan casting of you in various superhero roles like Nova and Spider-Man. Is there a Marvel superhero that you would like to play? If so, who and why?

Have you kept in touch with Robert Downey Jr since Iron Man 3? Any talk of Iron Man 4?

Yes, I talk with him still. And no, we don't talk about Iron Man 4.

Ty Simpkins for Deadpool anyone? But more seriously, would you like to see Simpkins' Harley character from Iron Man 3 go on to become Nova?

You can watch Simpkins in action in Jurassic World this weekend, as it hits theaters June 12.