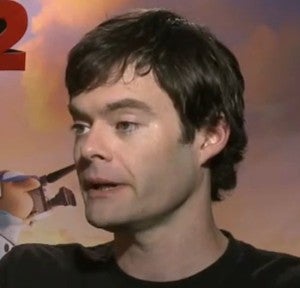 By now, most would have probably thought that everyone on the planet had heard about Ben Affleck being cast as Batman. Really, if you've gone on the internet at all in the last month, the news has been pretty much unavoidable. However, it appears that former Saturday Night Live star Bill Hader must live in some type of bubble when it comes to pop culture news. During an interview with Global Grind TV to promote Cloudy With A Chance Of Meatballs 2, an interviewer asks Hader for his thoughts on Affleck as Batman, and Hader's surprised reaction is priceless. A stunned Hader says, "He's going to be what? Ben Affleck's going to be Batman?" As his co-star Anna Faris breaks into a fit of laughter, Hader continues, "I didn't know that. Is he really going to be Batman? I think that's awesome." Then, Farris reveals that Hader didn't know about Miley Cryus twerking either. Check out Hader's reaction at the 3:10 mark.