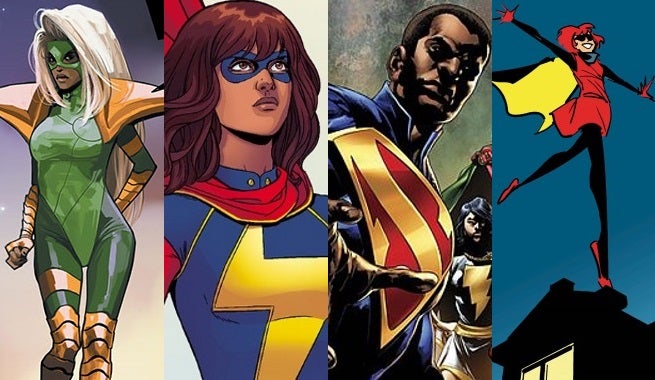 Comic-Con International has announced the nominations for the Will Eisner Comic Industry Awards for 2015, as chosen by a blue-ribbon panel of judges

Wilson, Staples, and Coover are among 34 women nominated this year; female writers, artists, and editors earned a total of 39 nominations overall.

Not far behind the frontrunners, each with 2 individual nominations and 1 shared, are Vertigo/DC's Astro City, nominated in the Single Issue, Continuing Series, and Cover Artist (shared) categories; IDW's Little Nemo: Return to Slumberland, tapped for Limited Series and Publication for Kids along with Coloring (shared); and Vertigo/DC's The Sandman: Overture (Limited Series, Painter/Multimedia Artist for J. H. Williams III, and shared Lettering). Another 17 titles received 2 nominations.

Brian K. Vaughan tops the individual nominations, with 4: the 2 for Saga plus 2 for The Private Eye (Limited Series and Digital/Webcomic). Individuals with 3 nominations are Multiversity's Grant Morrison, writer Paul Tobin (for Bandette and for Oni's I Was the Cat in the Kids category), Noelle Stephenson (for BOOM!'s Lumberjanes in the New Series and Teen categories and for her webcomic, Nimona), and Gary Groth (as editor of Fantagraphics projects nominated in the archival categories). Another 24 people received 2 nominations each.

DC, Marvel, and Fantagraphics top the list of publishers with the most nominations. DC and Vertigo/DC have 14 plus 4 shared. In addition to nominations for The Multiversity, Astro City, and The Sandman: Overture, DC has 2 nominees each in the Short Story and Kids categories. Marvel boasts 12 nominations plus 6 shared, including multiple nominees in the New Series, Humor, and Cover Artist categories. Fantagraphics' 15 nominations include 3 in the Graphic Album–Reprint category and 6 in the two archival categories.

In a somewhat surprising showing, between the TASCHEN archival collection, the new Return to Slumberland, the anthology Little Nemo: Dream Another Dream (from Locus Moon, 2 nominations), and an academic work, Winsor McCay's classic Little Nemo series accounts for 7 nominations this year.

The Graphic Album–New category nominees are Here, This One Summer, The Gigantic Beard That Was Evil, Kill My Mother, The Motherless Oven, and Seconds.

This year's awards do not to include the Best Adaptation from Another Medium category.

The Will Eisner Comic Industry Awards are presented annually at Comic-Con International. Check out the full list of nominees below.

"Corpse on the Imjin!" by Peter Kuper, in Masterful Marks: Cartoonists Who Changed the World (Simon & Schuster)

"Rule Number One," by Lee Bermejo, in Batman Black and White #3 (DC)

"The Sound of One Hand Clapping," by Max Landis & Jock, in Adventures of Superman #14 (DC)

"When the Darkness Presses," by Emily Carroll, https://emcarroll.com/comics/darkness/

Madman in Your Face 3D Special, by Mike Allred (Image)

The Fade Out, by Ed Brubaker & Sean Phillips (Image)

The Wicked + The Divine, by Kieron Gillen & Jamie McKelvie (Image)

Best Publication for Early Readers (up to age 7)

A Cat Named Tim And Other Stories, by John Martz (Koyama Press)

I Was the Cat, by Paul Tobin & Benjamin Dewey (Oni)

The Dumbest Idea Ever, by Jimmy Gownley (Graphix/Scholastic)

Dog Butts and Love. And Stuff Like That. And Cats. by Jim Benton (NBM)

In the Dark: A Horror Anthology, edited by Rachel Deering (Tiny Behemoth Press/IDW)

Can't We Talk About Something More Pleasant? by Roz Chast (Bloomsbury)

To End All Wars: The Graphic Anthology of The First World War,edited by Jonathan Clode & John Stuart Clark (Soaring Penguin)

The Gigantic Beard That Was Evil, by Stephen Collins (Picador)

This One Summer, by Mariko Tamaki & Jillian Tamaki (First Second)

How to Be Happy, by Eleanor Davis (Fantagraphics)

Through the Woods, by Emily Carroll (McElderry Books)

Walt Disney's Uncle Scrooge and Donald Duck: The Son of the Son, by Don Rosa, edited by David Gerstein (Fantagraphics)

Corto Maltese: Under the Sign of Capricorn, by Hugo Pratt (IDW/Euro Comics)

Stephen Collins, The Giant Beard That Was Evil (Picador)

Creeping Death from Neptune: The Life and Comics of Basil Wolverton, by Greg Sadowski (Fantagraphics)

What Fools These Mortals Be: The Story of Puck, by Michael Alexander Kahn & Richard Samuel West (IDW/LOAC)

75 Years of Marvel Comics: From the Golden Age to the Silver Screen, by Roy Thomas & Josh Baker (TASCHEN)

The Origins of Comics: From William Hogarth to Winsor McCay, by Thierry Smolderen, tr. by Bart Beaty & Nick Nguyen (University Press of Mississippi)

Wide Awake in Slumberland: Fantasy, Mass Culture, and Modernism in the Art of Winsor McCay, by Katherine Roeder (University Press of Mississippi)

The Flash Recap With Spoilers: "Wednesday Ever After"

The Flash: Who Is SPOILER?