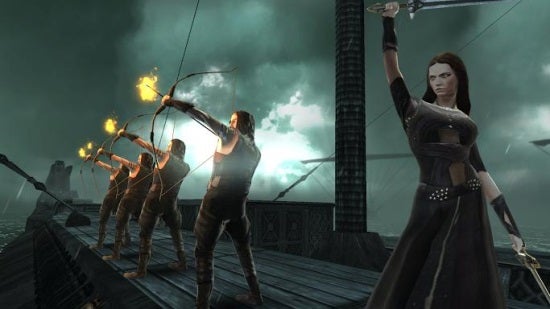 A trailer has been released for 300: Rise of an Empre -Seize Your Glory, a mobile and web based video game tie-in to 300: Rise of an Empire. The game has players helping the Greek general Themistokles to unite Greece against the invading forces of Artemisia, the commander of the Persian navy. It looks like a standard hack 'n' slash action affair, only with more half-naked men than usual. 300: Rise of an Empre -Seize Your Glory is now available in the Apple App Store, the Google Play Store, and can be played at the film's official website. In 300: Rise of an Empire, after its victory over Leonidas' 300, the Persian Army under the command of Xerxes marches towards the major Greek city-states. The Democratic city of Athens, first on the path of Xerxes' army, bases its strength on its fleet, led by admiral Themistocles. Themistocles is forced to an unwilling alliance with the traditional rival of Athens, oligarchic Sparta whose might lies with its superior infantry troops. But Xerxes still reigns supreme in numbers over sea and land. 300: Rise of an Empire comes to theaters March 7, 2014.