Continuing its tradition of teasing the origins of many of Batman's most notorious rogues, Bruno Heller's Gotham will debut the character of Harvey Dent this week, as portrayed by Nicholas D'Agosto. As many comic book fans should note (not to mention those who have seen 2008's The Dark Knight), Dent, Gotham's idealistic district attorney (he starts as an assistant DA here), is physically disfigured by the mob and is transformed into Two-Face, one of Batman's most psychotic and famous villains.

First introduced during the Golden Age of comics, Dent/Two-Face has gone on to be a part of of some of Batman's greatest and most celebrated stories. In anticipation/celebration of his small screen debut this week, here are five essential Dent/Two-Face stories. 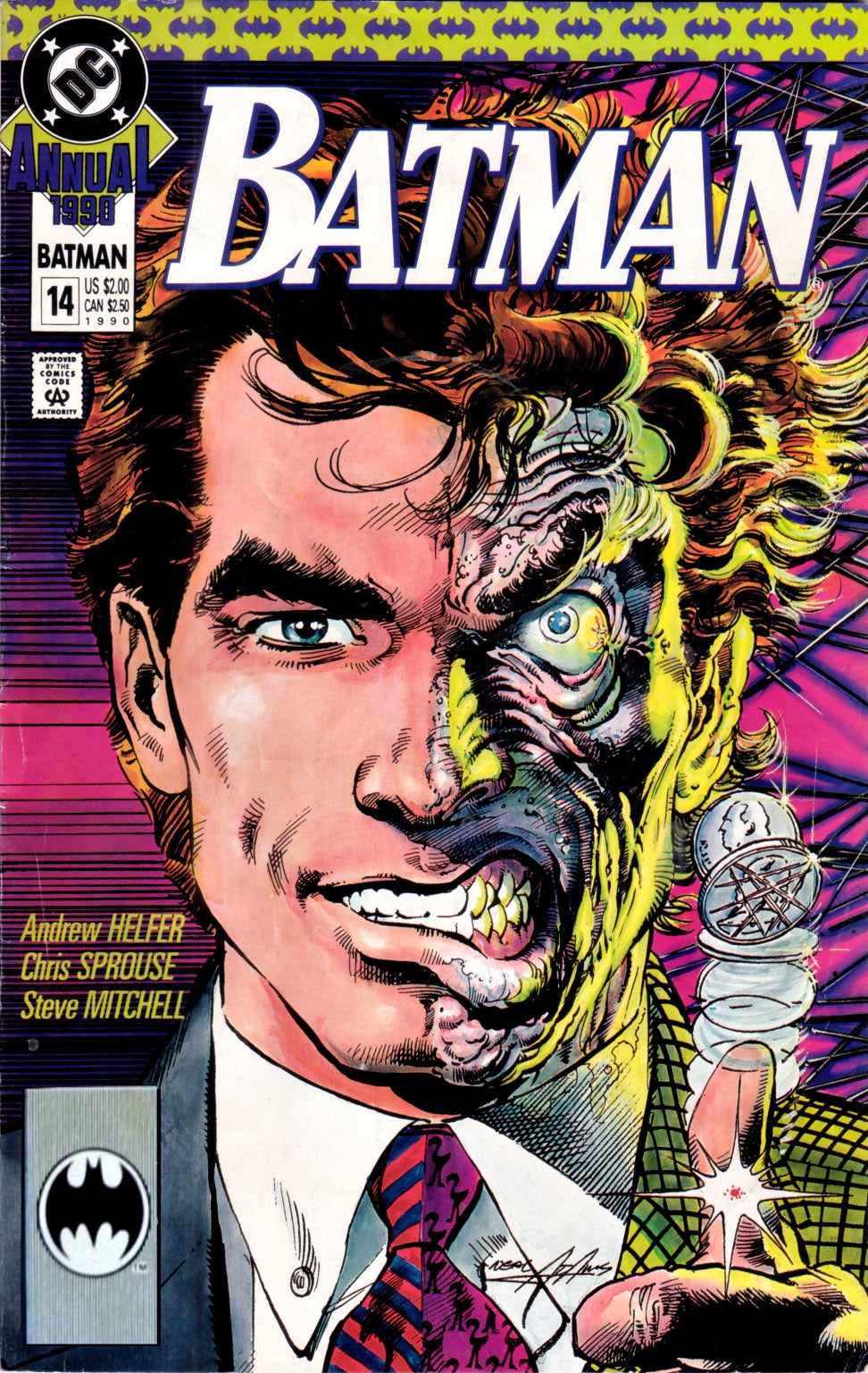 Oddly enough, despite first being introduced in 1942 in Detective Comics #66, Harvey Dent never received a proper, in-depth origin story until this 1990 issue by Andrew Helfer and Chris Sprouse. The comic focuses almost exclusively on Dent, and tells the story of how the man devolves from an idealistic district attorney who collaborates with Batman and Jim Gordon to take down all crime in Gotham, into the disfigured sociopath Two-Face. Helfer's story explores some of the early childhood traumas that adversely impacted Dent's psyche, which rationalizes the inevitability of his transformation into Two-Face. And of course there's the classic scene where a bottle of acid is thrown in his face, which physically deforms him.

Pretty much every other future Dent/Two-Face story that explores elements of the character's past has borrowed heavily from what Helfer and Sprouse created in "The Eye of the Beholder," which unquestionably makes the comic the most essential of reads for anyone who is trying to learn more about the character. 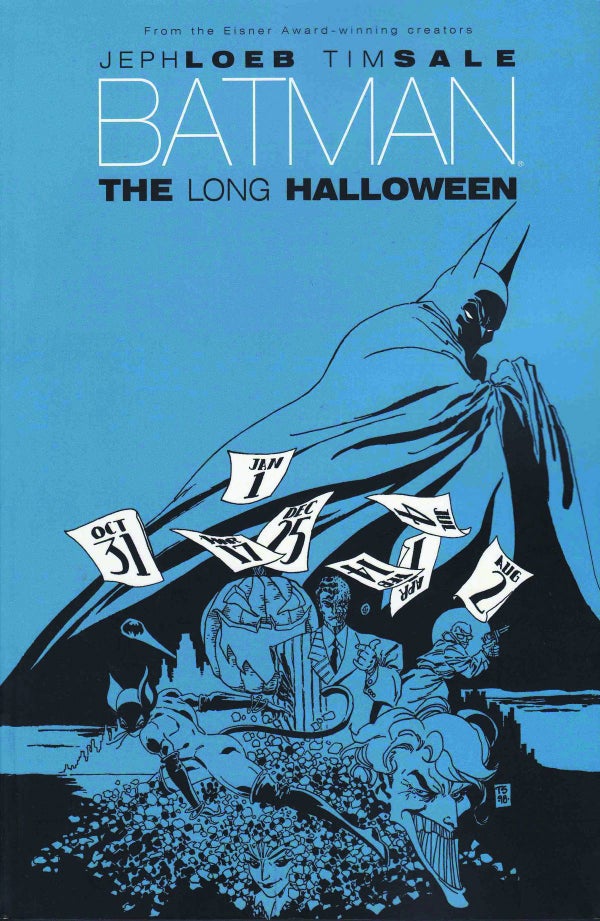 Considered one of the greatest Batman stories ever by fans and critics, Jeph Loeb and Tim Sale's The Long Halloween maxi-series is a definitive early Batman storyline, that has inspired how Batman, Gotham's underworld and Harvey Dent are depicted in other media, most notably Christopher Nolan's Batman film trilogy. The story follows a string of crime family murders perpetrated by the mystery crook Holiday. Similar to "The Eye of the Beholder," Batman, Dent and Jim Gordon all work together to try and get ahead of Holiday before he commits his next murder the following month. Adding to the tension of the story is that Holiday's handiwork is escalating the blood feud between Gotham's two chief crime families, the Falcones and the Maronis.

As the story unfurls, Dent starts to crack with the pressure of trying to solve this case. And then his psyche is completely shattered when Sal Maroni throws a bottle of acid at Dent's face, disfiguring. Eventually, Batman and Gordon peg Dent as the Holiday killer, reasoning that he committed the murders as part of his overzealous war on crime. But a unique twist at the end throws those assertions into question. Unfortunately, Dent has already transformed into the criminal Two-Face at that point, so his role in the Holiday killings is essentially rendered moot. 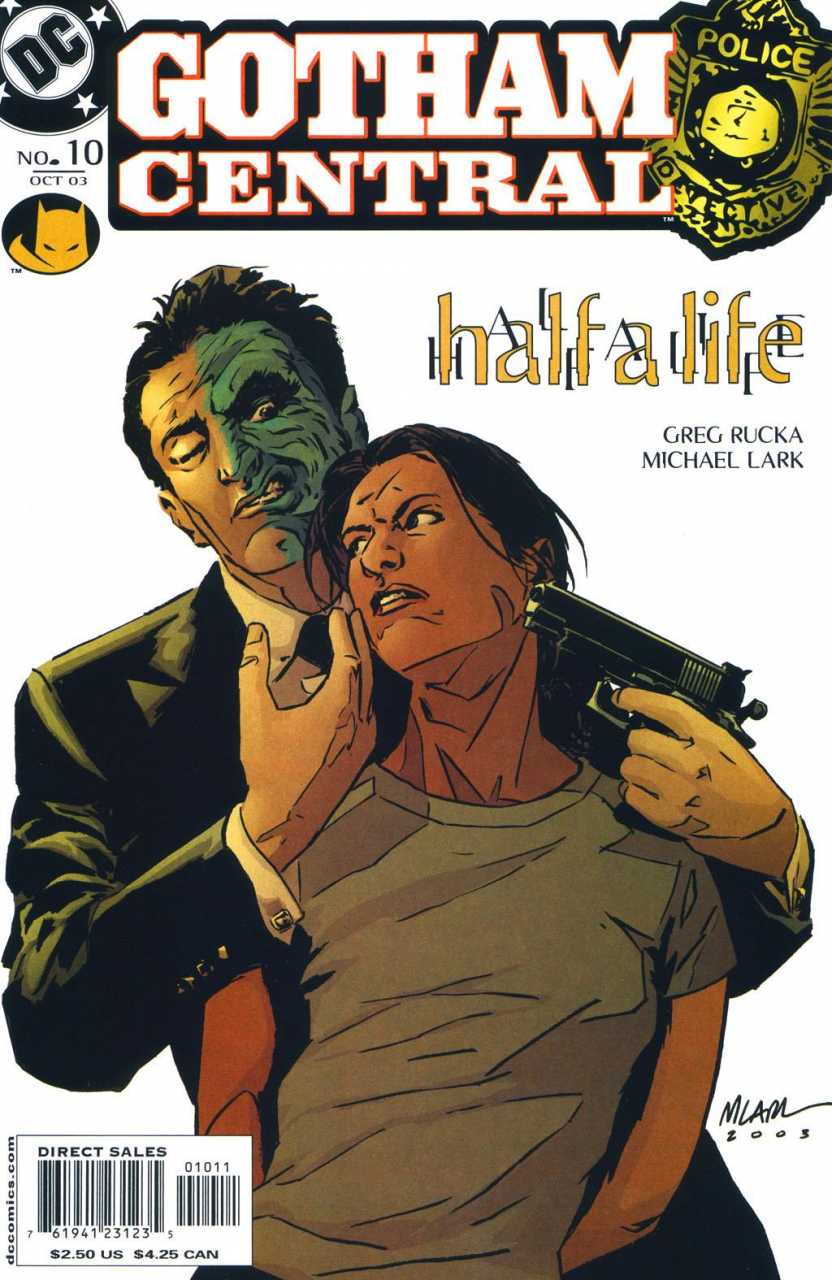 While Gotham may only be a loose adaptation of the early/mid-2000s police procedural series, Gotham Central (by Ed Brubaker and Greg Rucka), it's possible that elements of this award-winning story could come into play on the small screen. "Half of Life" is primarily a story about Gotham major crimes unit detective Renee Montoya, one of the department's very best cops whose life is shattered when she's both framed for a murder and very publicly outed as a lesbian.

It turns out that the entire conspiracy against Montoya has been perpetrated by Dent, who has a very unhealthy romantic obsession with her. Batman ends up saving the day and Montoya from Dent.

Will Gotham's interpretation of Dent pay homage to this storyline, which received an Eisner (Best Serialized Story) and Harvey Award (Best Single Issue or Story) in 2004? At the very least, hopefully Montoya and Dent have some level of interaction to at least plant the seed that there's some history there. 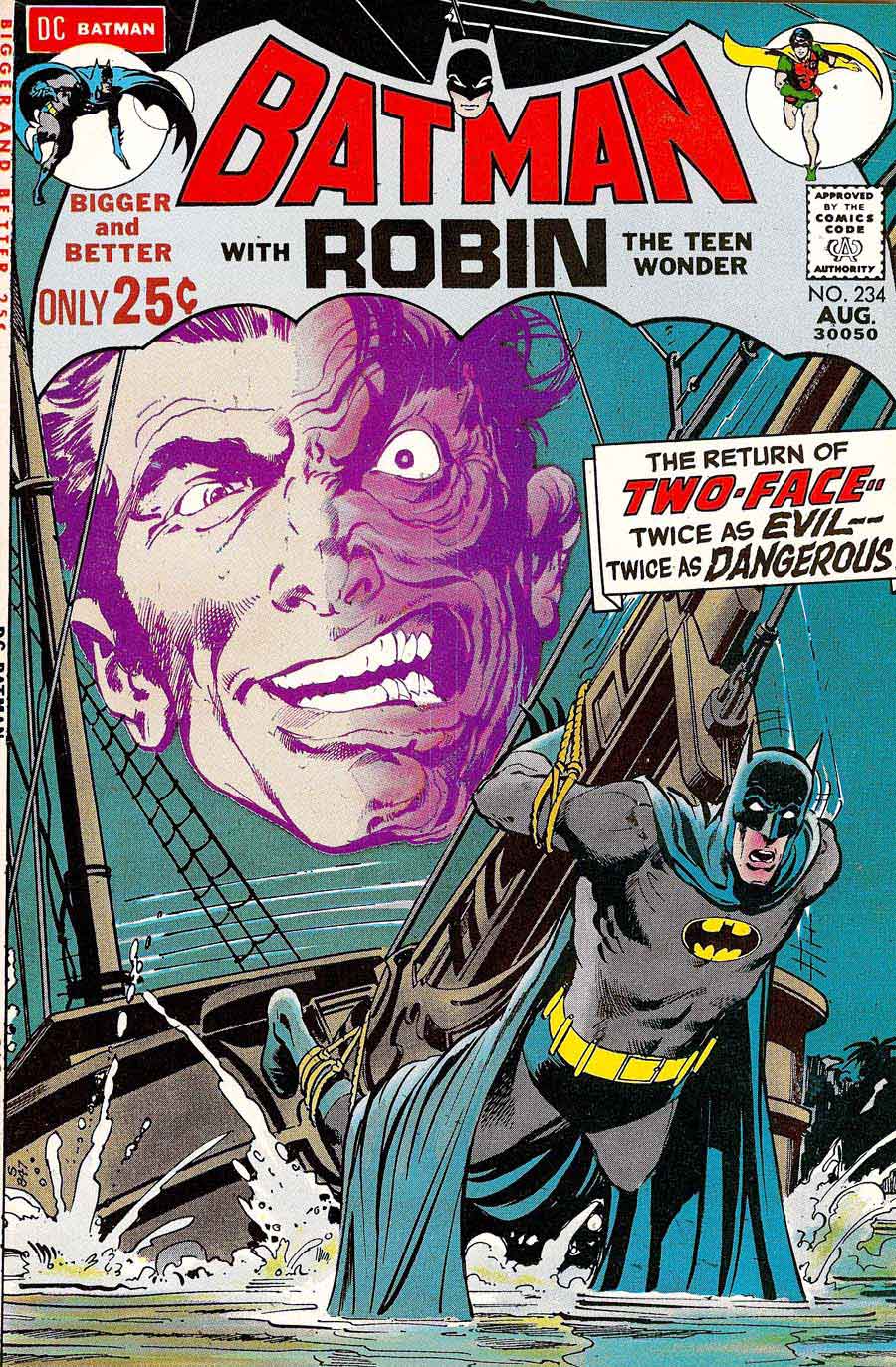 In 1971, Denny O'Neil and Neal Adams reintroduced Two-Face for the Silver Age (though by that point, the comic book world was transitioning more into the grittier Bronze Age). Regardless, the iconic Batman creators provide Two-Face with a bit of a darker edge, maintaining his obsession with twos and pairs, but also upping the drama with the villain's trademark coin flip by establishing as a tool of destiny for Dent.

The actual plot of the comic is a touch silly – it involves Dent trying to steal treasure from an old pirate ship. But again, O'Neil and Adams add a layer of seriousness to the Batman universe in how the story unfurls. An when an innocent bystander gets injured in a trap Dent sets for Batman (as dictated by a coin flip), Dent's twisted sense, but simultaneously rational sense of morals leads to an interesting twist. 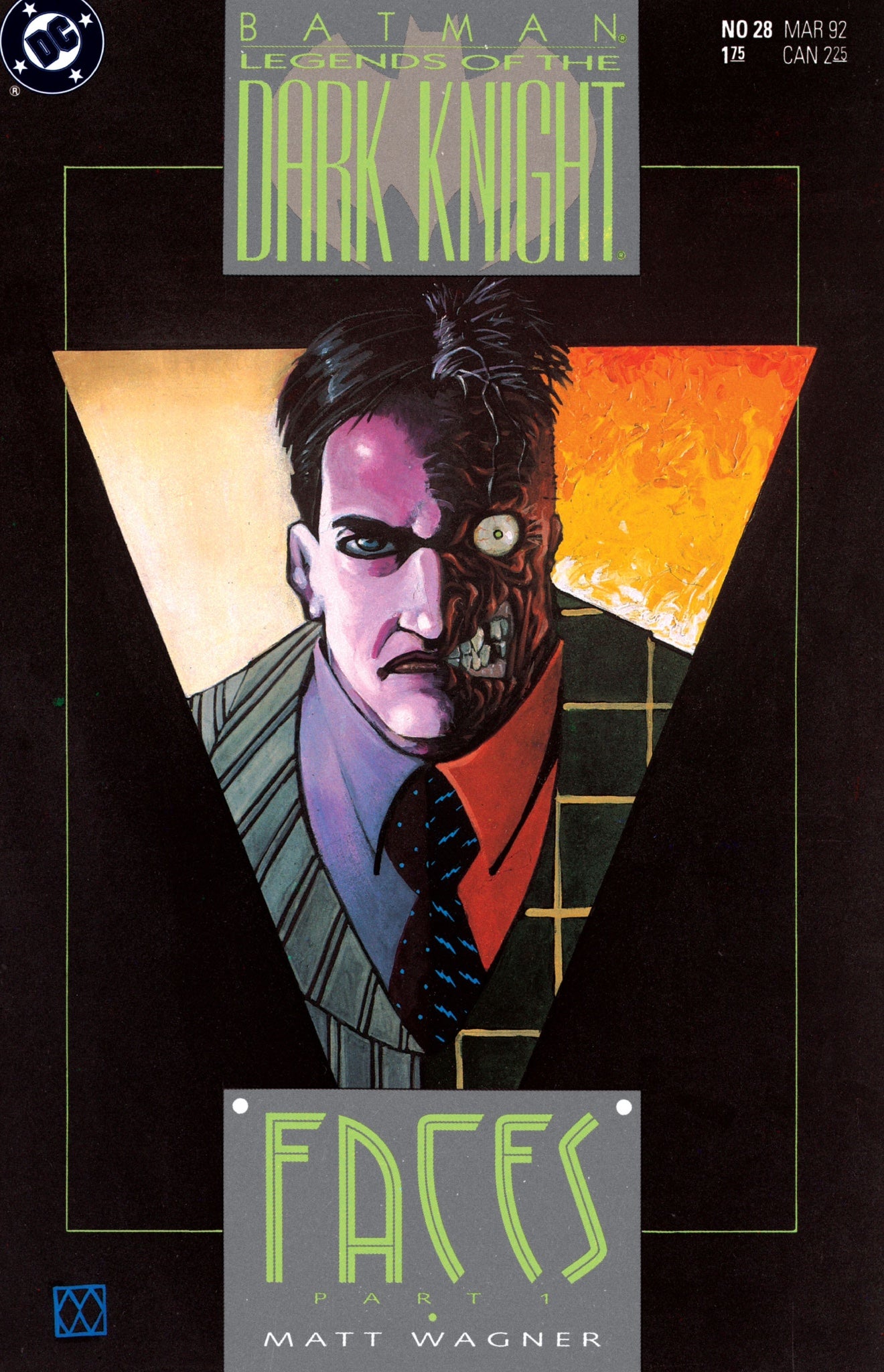 While not an "essential" read in terms of it being a historic comic, or a valuable piece of Dent's back-story, "Faces," by Grendel and Mage creator Matt Wagner, is an incredibly in-depth look at what makes Two-Face tick as a villain and person.

The general purpose of the story, which ran in the underrated Batman: Legends of the Dark Knight series, is that Dent is attempting to buy an island out from underneath Bruce Wayne to use as a refuge for all of the other "freaks" that he considers his brethren. But "Faces" is ultimately more complex and nuanced than your standard comic book fare. On a deeper level, the comic looks at Dent's obsession with duality but applies it more broadly to examine all of the various masks each different character wears in this story. It draws parallels between Dent, whose Two-Face persona is public and well-known, and Wayne, who hides behind a cape and a cowl as Batman. It also takes an insightful look at what constitutes a "freak." As one character tells the sociopathic Dent, "I may be a freak, but at least I'm not a monster."

My Hero Academia Season 6 is Coming to Toonami

WWE Hall of Famers Announced for This Week's WWE NXT