After a smashing first appearance in Edge of Spider-Verse #2 last year, Gwen Stacy Spider-Woman, aka, Spider-Gwen debuts in her own solo book this week with the publication of Jason Latour and Robbi Rodriguez's Spider-Gwen #1. This series will follow the story of a dramatically different version of Gwen Stacy from what most comic book readers are familiar with. Created during the Silver Age of Amazing Spider-Man, Gwen is arguably best known for her death in the iconic "The Night Gwen Stacy Died" storyline from the early 1970s. Still, she is one of the key supporting characters from the Spider-Man universe and has been captured in other media, most recently the two The Amazing Spider-Man films (played by Emma Stone) from 2012 and 2014.

To celebrate this new turn in her life, here are some of the key moments from Gwen Stacy's life in comic books: 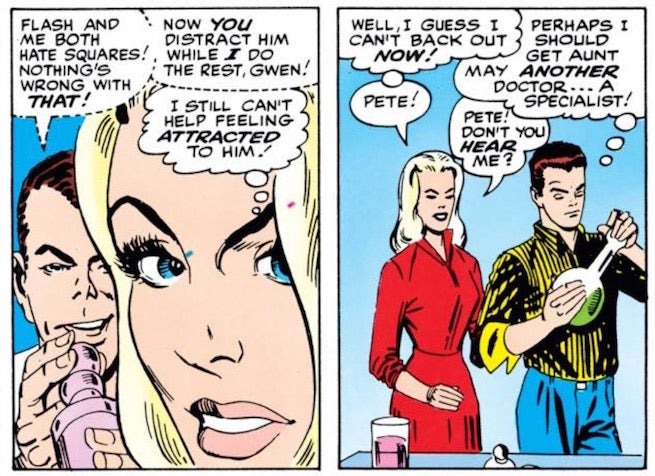 Before she was the first true love of Peter Parker's love, Gwen Stacy was introduced as the "beauty queen of Standard High" in Amazing Spider-Man #31 (the first part, of what many consider to be the greatest Spider-Man story of the Silver Age, the "Master Planner Trilogy"). The character would change considerably in only a short period of time – the definitive turning point being when Steve Ditko left Amazing Spider-Man as artist/co-plotter after issue #38 and John Romita Sr. took over on pencils. Intentional or not, Ditko's Gwen is an icy "queen bee," who is both weirdly attracted to Peter while simultaneously being offended by his aloofness and lack of fascination with her. 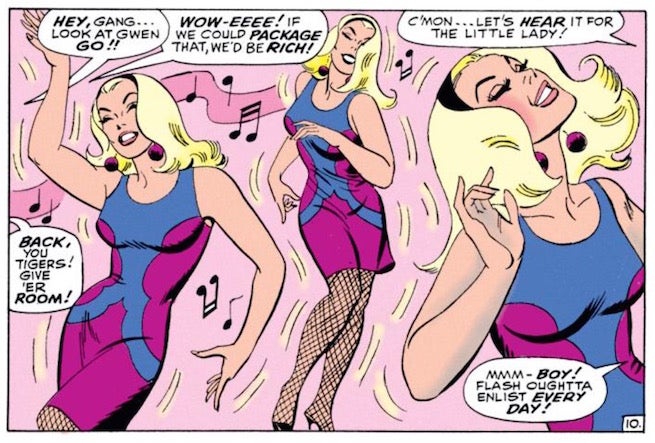 The Lee/Romita run on Amazing Spider-Man is often remembered for its emphasis on Peter's love life. While a potential relationship between Gwen and Peter was gently teased during the Lee/Ditko era, the stakes were raised considerably under Lee/Romita when a certain fiery redhead named Mary Jane announced to Peter, "Face it tiger … you just hit the jackpot!" in Amazing Spider-Man #42. From there, both MJ and Gwen were vying for Peter's affections a la Betty and Veronica in Archie comics. Fortunately, Peter proved to be far more decisive than Archie, and seemingly settled on Gwen (while still sorta flirting with MJ) during this three issue arc from 1967 (which would be later adapted for the epic Spider-Man: Blue miniseries – more on that in a bit – and for the memorable Joe Kelly issue of Deadpool that sent the "Merc With a Mouth" back in time in Peter's body).

Gwen's key moment during this arc came in ASM #47 when MJ was strutting her stuff on the dance floor and the blonde bombshell just completely takes over the room in a mesmerizingly gorgeous sequence courtesy of Romita's pencil.

3. The Death of Captain Stacy (Amazing Spider-Man #90 and aftermath issues)

Stan Lee would later call the death of Gwen's father, Police Captain George Stacy in Amazing Spider-Man #90, one of the best Spidey comics scenes he would ever write. And with good reason, as he and artist Gil Kane just completely knock this sequence out of the park, capturing the true tragedy of Stacy dying a noble death – trying to save a little boy from debris falling while Spider-Man and Doctor Octopus tangled on top of a building. When Spider-Man goes to comfort Captain Stacy, the man reveals that he knew he was Peter all along, asking him to look out for his daughter. Utterly spine-tingling stuff.

As if that wasn't sad enough, Captain Stacy's death sets off a chain reaction of events that spell the beginning of the end for Peter and Gwen. Gwen blames Spider-Man for her father's death and when Peter doesn't appear supportive enough, she leaves him to go live with her aunt and uncle in London in ASM #95. She eventually comes back to Peter in ASM #98, but even the biggest fan of the couple would admit that the relationship comes across as stilted and rudderless. This sentiment was shared by up and coming writer, Gerry Conway, leading to … 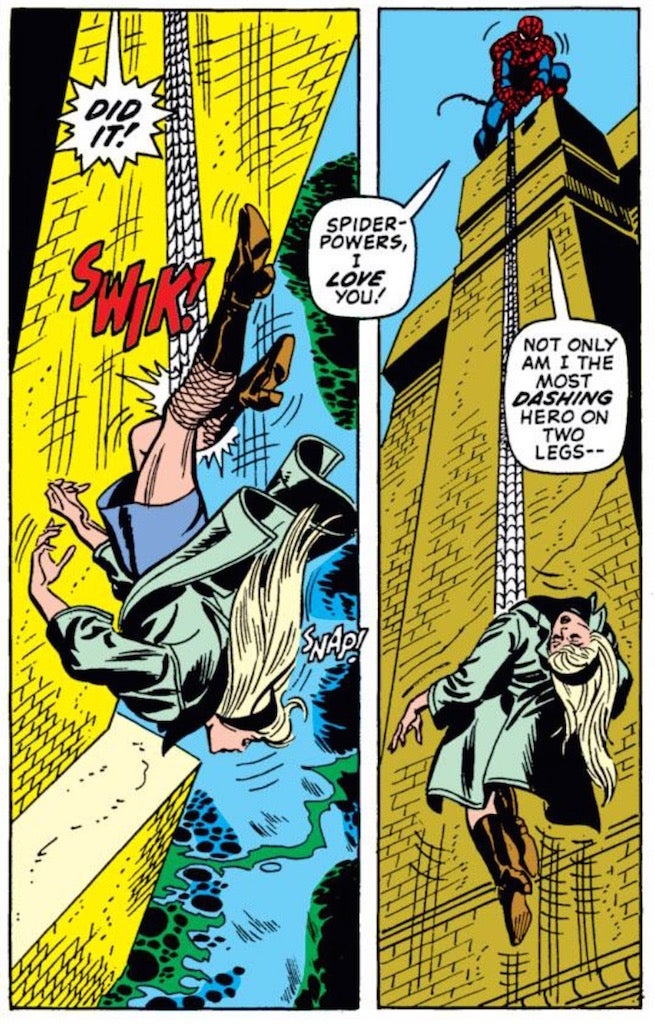 Some of you might have heard of this one.

Basically Conway, Kane and Romita come together (whether or not Lee was consulted with has always been a point of debate depending on the source and interview given) and decide to end the bland, milquetoast Peter/Gwen romance in the most final way possible – by ending the age of innocence in comics and having Gwen get murdered by the Green Goblin.

Despite the controversy it caused – Conway was one of the most hated men in comics for years because of his role writing the story – "The Night Gwen Stacy Died," is one of the most transformative, landmark moments in the medium's history. Prior to this comic, a major (innocent) supporting character on the level of Gwen – the girlfriend of the hero – had never been killed off in such cold, calloused fashion. Adding to the book's legendary status is the fact that after Gwen is pushed off the bridge by the Goblin, Spider-Man's webbing snaps her neck, thus starting the debate, was it the fall that killed her, or Spidey's webbing? Such complicated events and questions led to an era of darker, grittier stories in comics.

ASM #121 impact will always be lauded for as long as Marvel keeps publishing comic books, making it not only an essential Gwen moment, but an essential moment for the entire industry. 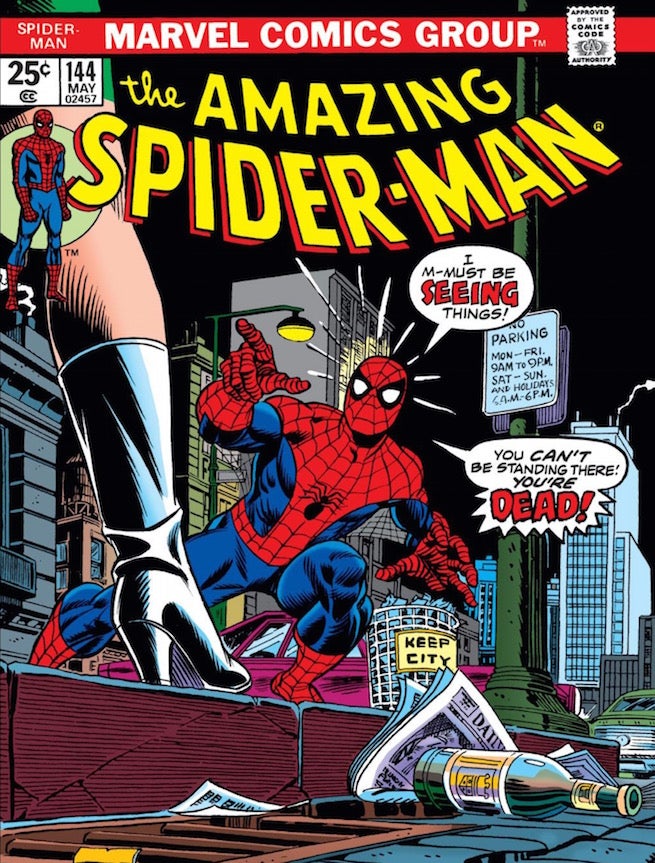 No, not the "Clone Saga" that for some, ruined Spider-Man comics in the 1990s, but rather the Conway/Ross Andru storyline that briefly resurrects Gwen as a clone, before introducing a Spider-Man clone (that would go on to become Ben Reilly in the 90s).

This is the arc where it is revealed that one of the newest troublemakers in Spidey's life, the Jackal, is actually a former professor of his at Empire State University, Miles Warren. Warren becomes so infatuated with Gwen, that upon learning of her death, he goes insane and creates a clone of her.

Still, the real crust to the "Original Clone Saga" deals with Peter's reaction to Gwen's improbable return. At that point in time, Peter is starting to get quite serious with Mary Jane, only for Gwen's clone to muck things up. However, after he defeats his own clone and the Jackal (the first of many times the Jackal seemingly dies), Peter chooses MJ, and the Gwen clone leaves New York City (only to return during the reviled 90s "Clone Saga"). ASM #149 ends with Peter entering MJ's house and closing the door behind him – a scene that has been interpreted a number of ways, including marking the moment that Peter officially moved past Gwen's death. 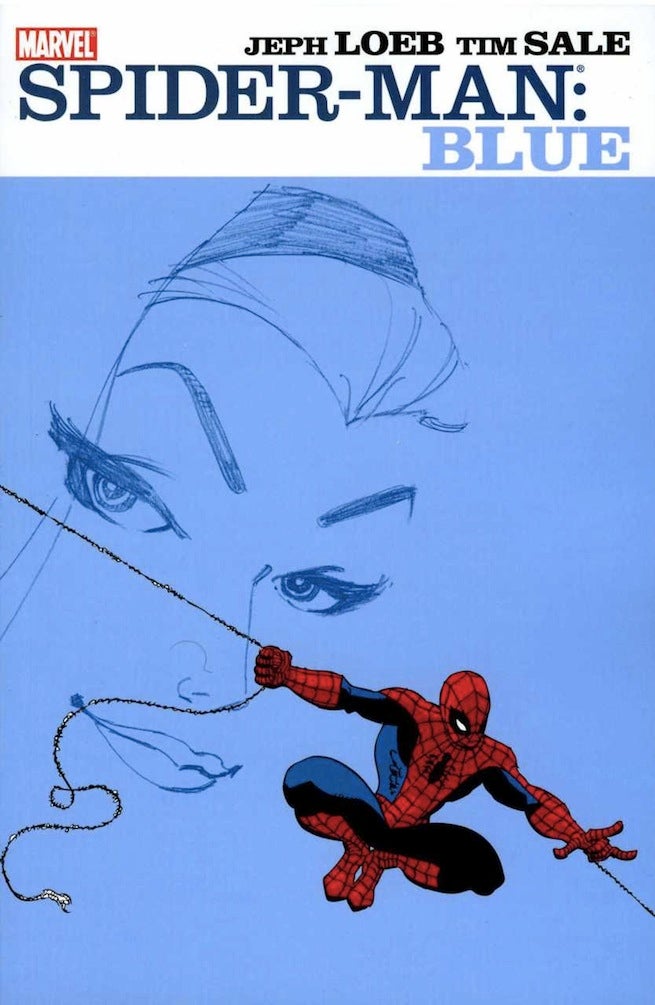 The Gwen/Peter romance is immortalized for a new generation of readers in this incredibly sentimental miniseries from Jeph Loeb and Tim Sale. This timeless story captures Peter digging through an old box of things, reminiscing about his more innocent years as a college student with Gwen, Mary Jane and Harry Osborn. By placing the events of Amazing Spider-Man #47-49 in the background, Blue presents a richer tale of how Peter courted Gwen – or really how Gwen courted Peter. For added emotional oomph, Loeb and Sale integrate MJ into the present day sequences (at that point in time, Peter and MJ had been separated in all of the Spider-Man ongoings), demonstrating that it is possible for a person to find true love two times over.

Blue doesn't actually introduce any profoundly new information about Peter and Gwen, but what it lacks in plot, it makes up for with rich, introspective character moments. As a result, Blue is one of those comics that is a must read for people who are new to Spider-Man. It efficiently covers the bases of one of the more important eras in Spidey/Peter's life, while really capturing the essences of the character that has made him and his supporting cast so beloved for so long. 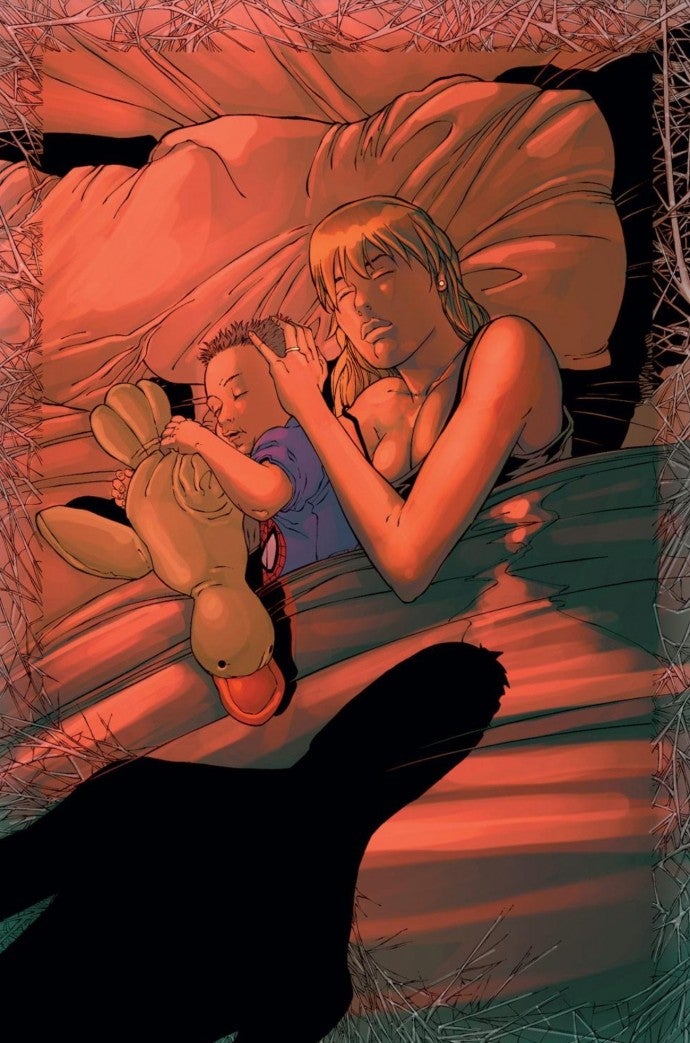 As a tie-in to the larger House of M event, this five-part miniseries from Mark Waid, Tom Peyer and Salvador Larroca, depicts Peter in the alternative "wish fulfillment" world created by Scarlet Witch's hex (the central plot of the main House of M book). In it, Peter is a beloved superhero/actor who is married to Gwen, has a kid, has J. Jonah Jameson as his errand boy, and Uncle Ben and Captain Stacy are still alive. It all comes across as such a perfect, bucolic life for our hero, until it becomes apparent that the world these characters are living in is not real, thus setting of a chain of complications.

Still, it's an interesting choice that in this alternative world, Peter chooses a life of fame and fortune alongside Gwen, rather than with his current (real world) wife, Mary Jane. It would still be a few years before Marvel editorially wiped away the Peter/MJ marriage, so you can't even say House of M was any kind of foreshadowing for "One More Day." But if you look at this story in concert with some of the other comics listed here (especially Spider-Man: Blue), it's easy to conclude that if Peter's romance to Gwen wasn't tragically cut short with her death, the two characters would have likely gone the distance with each other. 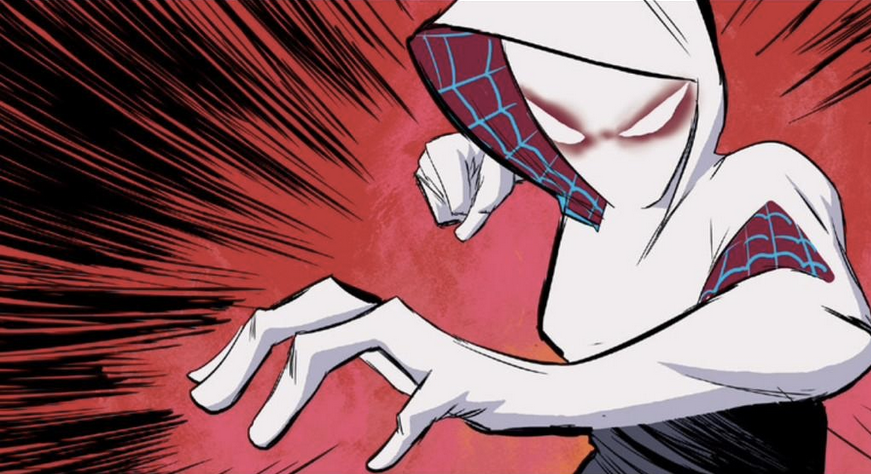 The comic that started the current wave of Gwen-mania. Writer/artist Jason Latour and Robbi Rodriguez hit upon something in this one-and-done story from the Edge of Spider-Verse miniseries that's filled with energy and verve. It connected with fans in a way few current comics have managed to do, leading to the launch of this week's Spider-Gwen ongoing series. If you missed Spider-Gwen's debut the first time around, no worries – the comic has gone through multiple printings and, of course, can always be purchased in digital format for instant gratification. In it, readers will find an alternative version of Gwen where she has inherited spider-powers while the death of teenage outcast Peter Parker is the catalyst for her becoming a superhero (her "Uncle Ben moment"). Also, Gwen plays drums in an all-girls punk bank, and is generally an enjoyably snarky leading lady – aka, this is the most interesting Gwen Stacy has been in years.

New Lord of the Rings Game Teased by The Game Awards