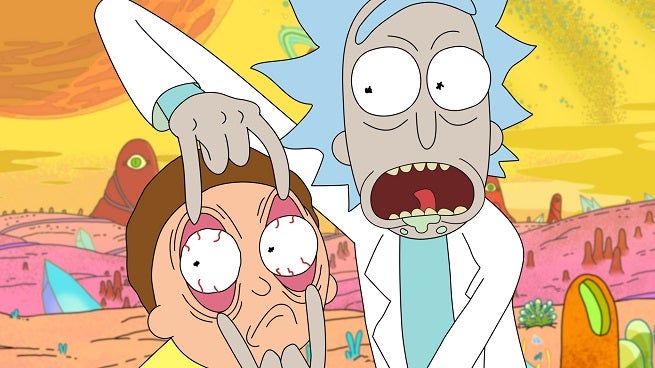 Not only can we bring you three sample pages of the exclusive comic book included inside the Blu-ray, but there's also a scene just for our readers embedded just below, complete with a puppet intro!

The clip takes a look inside the show's writers' room, where Harmon has to say of one of his fellow writers, "I don't know if it's illegal, what he's doing, but it's definitely disturbing."

The comic, titled The Good Morty, is structured like a Chick Tract, those little landscape-formatted, black-and-white flipbook comics that are generally drawn in a very rudimentary fashion and meant to convey moral (usually religious) messages.

Rick and Morty, obviously, play that element for laughs since, as with anything you might get from Dan Harmon, the show isn't exactly as morally black and white as Chick Tracts. 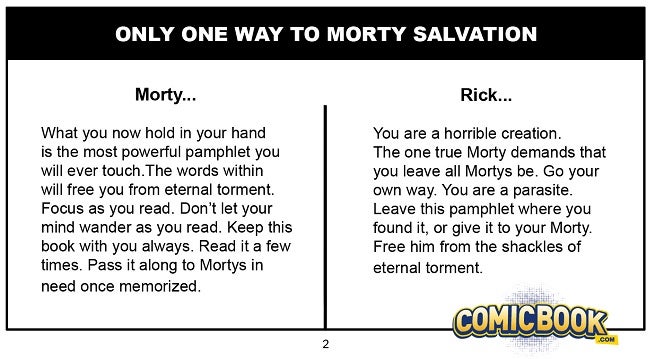 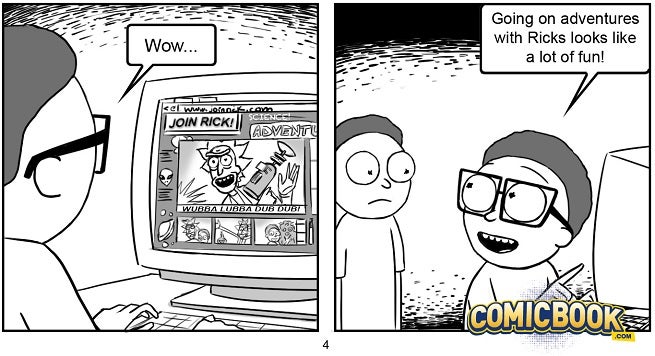 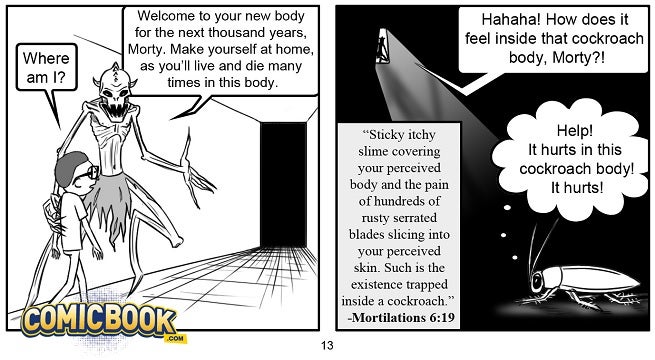 Rick and Morty Season one is on sale now on Blu-ray, DVD and digital. The release features all 11 hilariously-frantic first season episodes plus a healthy dose of bonus materials including an exclusive, 16-page comic book created by Dan Harmon (Community) and Justin Roiland (House of Cosbys), as well as guest commentary tracks from industry luminaries like The Simpsonswriters, Pendleton Ward and Kent Osborne (Adventure Time), and Robert Kirkman and Scott Gimple (Walking Dead).

Other bonus features include an extensive behind-the-scenes featurette, deleted animatics and creator commentaries and animatics for each episode. Additionally, the title's Blu-ray version will also include a digital version on Digital HD with UltraViolet Packaged in custom-designed slip case, the Rick and Morty: The Complete First Season Blu-ray and DVD release is an impressive home video debut for one of Adult Swim's most popular series.

After missing for nearly 20 years, Rick Sanchez (Justin Roiland), a genius scientist, suddenly arrives at his daughter Beth's (Sarah Chalke) doorstep looking to move in with her and her family. Beth welcomes him with open arms, but her unremarkable husband Jerry (Chris Parnell) is less than thrilled about the reunion as Rick's arrival shakes things up around the household. Rick converts the garage into his personal laboratory and gets to work on all sorts of dangerous sci-fi gadgets and contraptions, which wouldn't be so bad if he didn't constantly involve his grandchildren Morty (Roiland) and Summer (Spencer Grammer) in his insane – but wildly entertaining – adventures that transcend space and alternate universes.