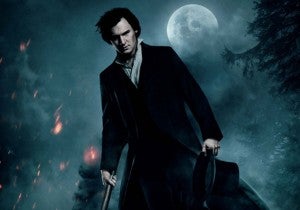 At the Kapow! Convention in London today Dark City star Rufus Sewell, who plays the villain in the upcoming film adaptation of Seth Grahame-Smith's Abraham Lincoln: Vampire Hunter, discussed the possibility of a sequel to the film in which his character may (or may not) be featured.

According to a report at Comic Book Movie, Sewell (who often plays the villain, having squared off with the likes of Heath Ledger in A Knight's Tale in the past) claims that the movie may not perfectly follow the book, and that the fate of his character Adam was a hotly debated question throughout the production process.

"They couldn't quite make their mind up during filming whether my character lived or died actually at the end," Sewell is quoted as saying. "But to tell you the truth as people kept saying, 'I'm a vampire so it doesn't really matter.'"

On the topic of a sequel, Sewell said that there's already one in progress, but that he's ever-so-hesitant to commit to another just yet.

"The experience of doing it was great fun," said the actor. "And if the movie is as fun to watch as it was to do, then I'd be up for a sequel possibly. But you know, I'll hold back on that for the moment."

Carrie Fisher, Norman Reedus, and More Getting Hollywood Walk of Fame Star in 2022