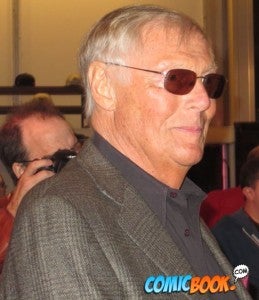 Last night at Meltdown Comics in Los Angeles, Warner Bros. Consumer Products put on a special preview of the t-shirts and toys they've got coming up for sale from Batman. And not just ANY Batman--specifically the 1966 Batman TV series that has been the subject of a number of rights battles in the last few decades, preventing its DVD release and (up until very recently) almost any official merchandise from being released. It's coming now, though, and during the course of the opening, ComicBook.com had a chance to talk to Adam West about the series and his take on the various different screen iterations of Batman. It was a while before West actually arrived for the event, but when he showed up, it was a bit like Beatlemania! It was near impossible to get near him as he looked at the displays and greeted fans. Once I reached him, the man was as charming as Bruce Wayne ever was. For his own version, West told us that he knew the show would have staying power " It was right when we finished the first episode. The people working on the show were all so great and I could tell that the show was good for the whole family, with moral lessons for the kids and humor for the adults. I knew right away that I would live with it for a very long time." "I don't like to comment on that because they are doing their thing and I did mine," he said when asked what he thought of the newer films, where Batman's motives and methods are less unambiguously virtuous. "There is a dark knight and a bright knight."

Adam West on Batman: "There Is a Dark Knight and a Bright Knight"

Critical Role Gets a Clue Game

Pokemon Scarlet and Violet's Leaked Cherubi and Tauros Are Fakes