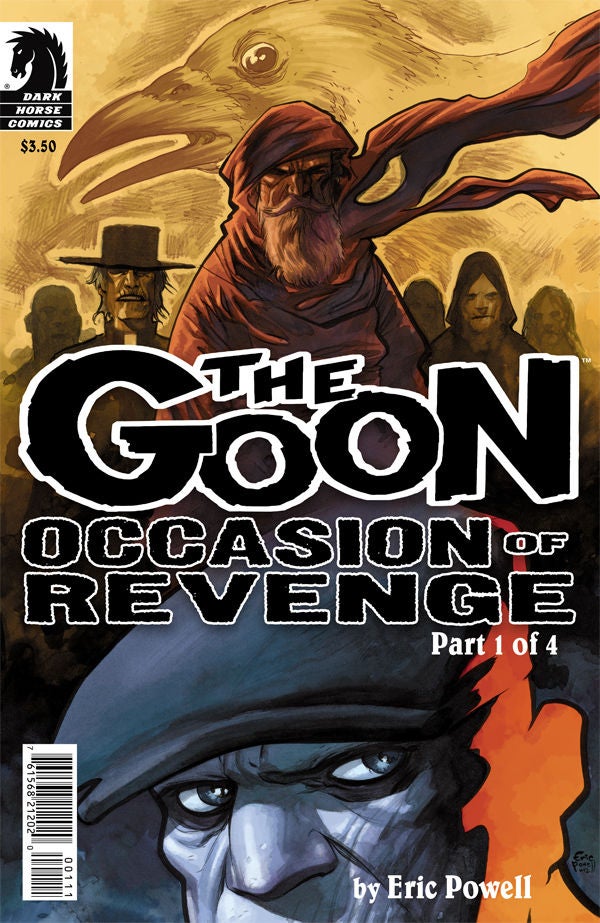 Hail, hail the Goon is here! What the heck do I care? To be honest, I care quite a lot.

Eric Powell's The Goon is one of those series that I've had my eye on for a while. I'd picked up the issue of his series that featured Hellboy partly because team-ups are generally fun reads and partly because of my interest in Mignola's signature creation. I remember enjoying the book but didn't become a regular reader of The Goon. Later, my brother got into the series and updated me on talk of a movie, animation tests, and the associated Kickstarter. After reading a few more issues, I was saddened by the hiatus Powell seemed to take from writing and drawing the big lug.

All of that changes with the release of this issue and to a lesser degree the one-shot The Goon: One for the Road that came out on June 25th. Still, the latter was a fun one-off honoring cartoonist Jack Davis while Occasion of Revenge takes us back into the Goon's ongoing narrative. I suppose the question is how well it holds up. Well, let's dig into the spoiler-free breakdown… 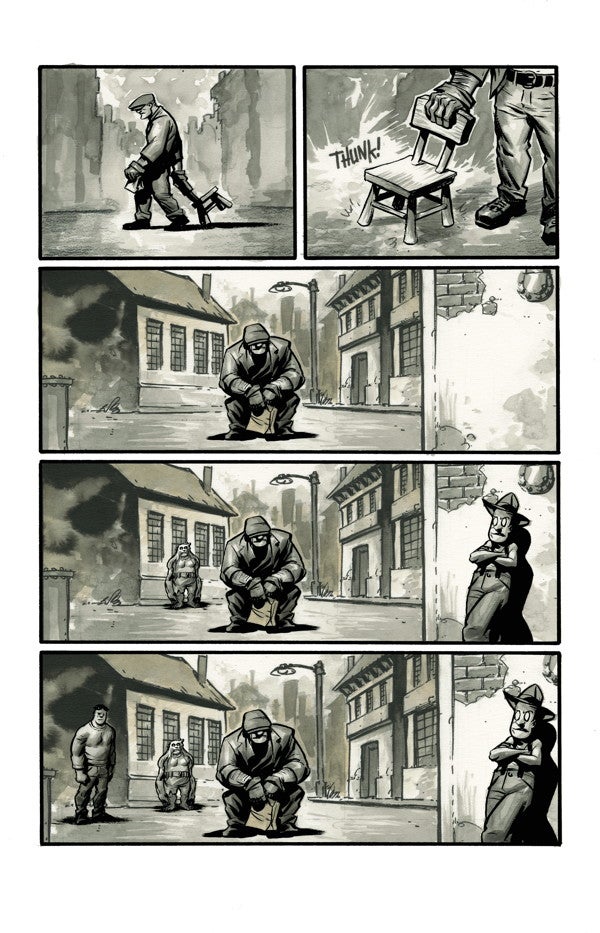 Part of what I love about The Goon is Powell's visual aesthetic. His style combined with the early-to-mid 20th century look and setting of the Goon's world creates a kind of classic/retro charm that I personally appreciate. Who doesn't want to see a bruiser in a cloth cap fighting evil alongside a dead-eyed little runt in a fedora hoisting a Tommy gun, especially when it's rendered so beautifully? From the cover through the end of the book, this issue is a visual treat.

Having referenced this issue's cover, let me just mention that it is beautifully put together. There is just enough color to be eye-catching and it is appropriately menacing. The figures at the top are tantalizingly mysterious and threatening while the Goon's expression at the bottom is beautifully captured both resolute and also menacing in his own way. Compositionally, the top and bottom mirror each other in a surprising way. The brim of the Goon's cap is quite similar to the swoop of the raven's beak. Also, the focal point of the bearded man at the top is positioned at center as is the Goon's knotted brow, both in the same position with respect to the raven and brim respectively. Bottom line, I quite like this cover.

Interestingly, Powell reminds me of Frank Miller a bit in the way he handles color in this issue and I mean that in the best way possible. One of Frank Miller's strengths was his creation of visual interest by injecting splashes of color into a largely black-and-white story. Likely intended to mirror the more serious tone of this miniseries, this issue is particularly devoid of color with the exception of artfully selected splashes placed throughout. Once or twice I question how successfully they were integrated into the overall artwork but they are largely successful and give this book a distinct look. 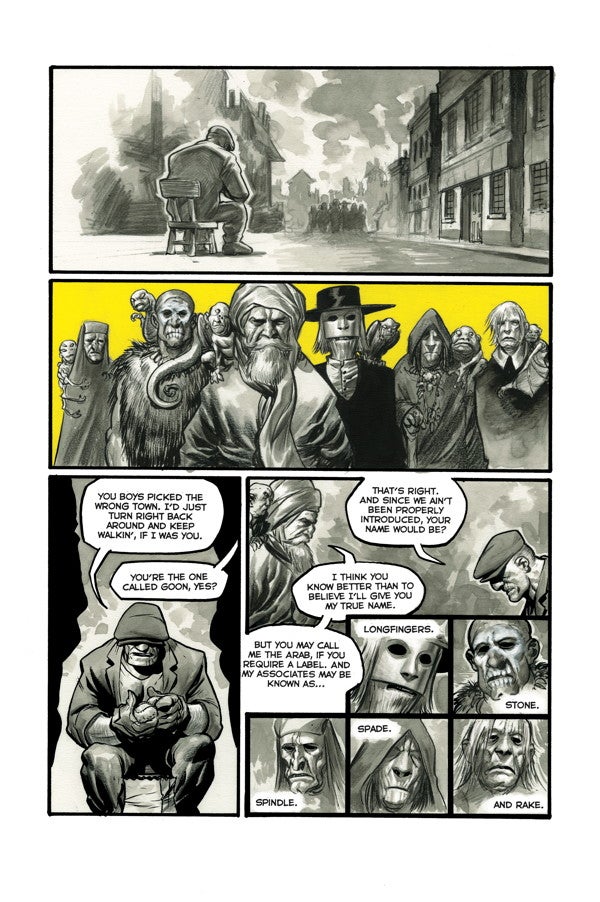 In terms of story, this miniseries picks up from issue 42 of The Goon the series. It wouldn't hurt you to pick up that issue to refresh your memory on where things stand as well as reacquaint yourself with the content of the Goon's troubling dreams which crop up again in this book. Just to give you a sense of where things stand, back in issue 42 the Zombie Priest warned the Goon that the other, more powerful, members of his order are coming to town and when they arrive it won't be pretty. I think you can guess who shows up.

Yes, readers of this book will be treated to the first round in the Goon's fight against the Zombie Priest's erstwhile brethren. It's worth noting that each of these foes is visually interesting and distinct with their own evocative nickname. They are appropriately menacing and one gets the feeling that the fight ahead will not be an easy one on either side. As such, I'm quite looking forward to reading the rest of this miniseries to see how everything plays out.

Still, I don't want you to get the impression that the book is devoid of humor. Franky is always a fun character and he provides a good amount of comic relief without detracting from the overall narrative. Even when he's being serious, his foul mouth can still inspire a chuckle or two. Oddly enough, this book also hints at an element of romance for the Goon. I won't say with whom but it's certainly not Franky. With the Goon's track record, I can't see this turning out well but you know what they say about that hope that springs eternal within the human breast… 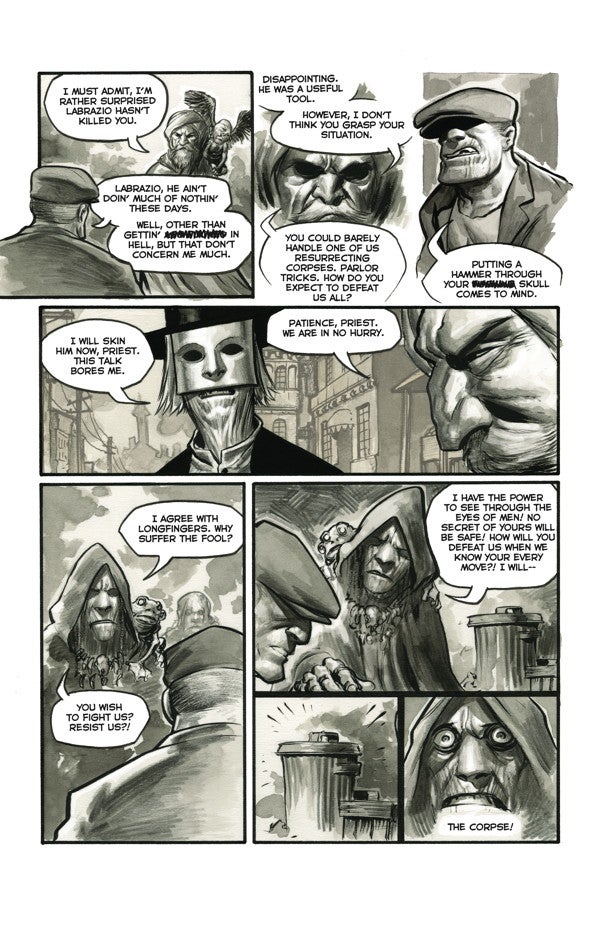 It's hard to come up with anything in this issue that was unsuccessful enough to place in this section of the review. If I had to pick something, it would be a particular "BLAM!" sound effect. While Powell generally does a good job of integrating his sound effects into the overall artwork, this one sticks out like a sore thumb. I don't know if the color is too bright a yellow or the lines too clear and distinct, but it feels out of place.

This issue contains a side story or subplot about a sociopathic woman named Sandy Wayne who uses men and then leaves them to their despair. It's not a bad story but I don't see how it ties into the central narrative. Perhaps it will continue over the subsequent issues and this connection will become clear. As it stands though, it feels a bit tacked on. That isn't to say that it is purposeless as it serves to emphasize the nature of the town that the Goon calls home and the curse that permeates it. Still, I wish it didn't feel quite so incidental.

If you've ever been curious about The Goon, then this isn't a bad place to jump on board. I'd recommend picking up issue 42 to get some of the backstory and take a quick spin through the series' Wikipedia page to familiarize yourself with the cast of characters; however, neither step is truly necessary to enjoy this book. It's great to read a book now and again from a writer-artist who can present a truly singular vision and with Powell's artistic ability, writing skills, and penchant for both humor and pathos this is a great book with which to do that. I'm sure Franky would have words with you if you failed to jump on board so why take that risk?

The Goon: Occasion of Revenge #1 of 4 will be in stores on July 23 from Dark Horse Comics.

Advance Review: The Goon: Occasion of Revenge #1 Is a Great Jumping-On Point