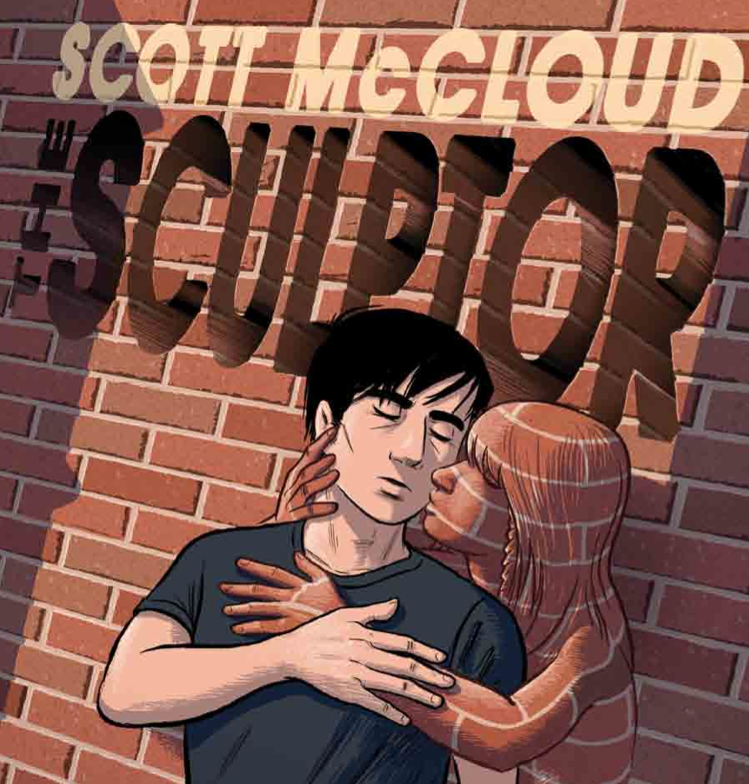 When I look at the first and final panels of The Sculptor a few weeks after first reading it, the entire experience comes rushing back. The joy, the discovery, the sadness, and the enlightenment: all of these elements are brought back by those two images alone and the small word balloons in each. That response is no accident. It is the purposeful result of a master craftsman carefully honing his work into an exact form. Those two panels are emblematic of the art and craft that is contained in every panel of The Sculptor, Scott McCloud's newest comic and the magnum opus of America's premiere comics theorist.

The Sculptor tells the story of David Smith, a young artist barely surviving in New York City. He is without a family, and has very few friends or prospects. When Death offers him the ability to shape any material with his bare hands, he takes the deal even though it only leaves him with 200 days to live. This is only further complicated when he meets Meg, the love of his life, with less than a year to live. What David creates and the people with whom he interacts in those 200 days tell a phenomenal story about the biggest of big ideas: art, time, life, and love.

McCloud is a master of the comics form. Understanding Comics, his guide to the medium, as well as follow ups Reinventing Comics and Making Comics are the standard for teaching comics in Western classrooms. There is no one living better qualified to teach and dissect comics. Yet The Sculptor is his only significant work of comics fiction besides The New Adventures of Abraham Lincoln in 1998 and Zot! between 1984 and 1990. The New Adventures of Abraham Lincoln found McCloud experimenting with digital comics and formatting, and was widely regarded as a failure despite its worthy goals. Zot! was much more focused on the core craftsmanship that McCloud explores as a comics theorist, and was beloved for its clear, impactful storytelling. There are elements of experimentation within The Sculptor, but it draws from the same core as Zot!, exploiting an impeccable understanding of the comics medium in order to perfectly convey the ideas and feelings of its creator.

The comic juxtaposes fantastical imagery with small human moments, both clarifying why this story could only be told as a comic and constructing a deeply compassionate story. David's deal with Death and the use of his new gifts are grandiose in their presentation. He is a dreamer whose head is filled with enough ideas to fill all of New York City and does not restrain himself in the creative process. When McCloud is depicting the process of creation, he fills the panels with movement and power. Raw materials swirl and slide through space like jets of water in zero gravity. The final results are equally impressive. There is a purity to McCloud's penciling, presenting perfectly smooth surfaces and flawless geometric forms. David's sculptures reflect the transformation of ideas into reality, and could not exist so purely in another medium.

Those sequences are fireworks, climactic fits of effort that steadily lead to The Sculptor's finale. Most of the comic exists within much more mundane aspects of David's life, his internal and external struggles. These conflicts are assembled just as much by McCloud's artwork as any words on the page. The facial expressions and body language of his characters is crystalline in its communication. With only a few lines and minimal shading, McCloud builds complex mannerisms and emotions into each panel of the comic. His study of cartooning has allowed him to depict the entire range of human experience as well a photograph, but with significantly less detail. 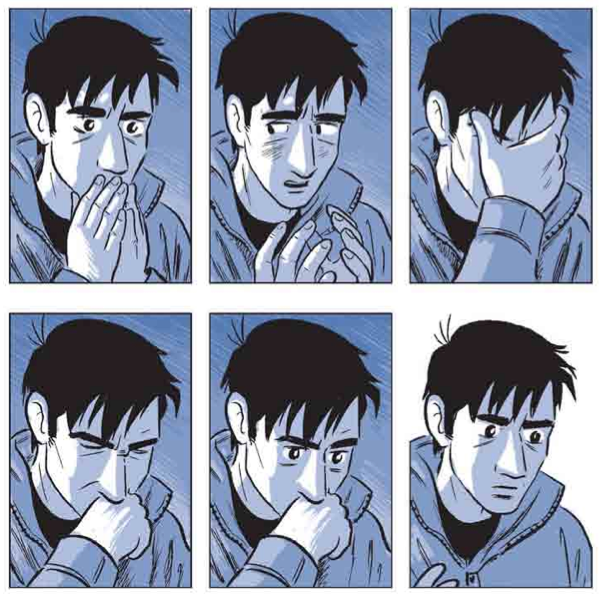 Early in The Sculptor David loses almost everything he has and is left in the street pondering the terrible situation he is in. There is no internal monologue or narration provided, David's face tells the complete story of his thought process. He moves from fear to regret to anguish all before finally emerging with a sense of resolve. In six panels, McCloud presents a complex internal dialogue without using a single word. There is no ambiguity to David's experience here. It is an Oscar worthy performance constructed purely from pencil and ink. 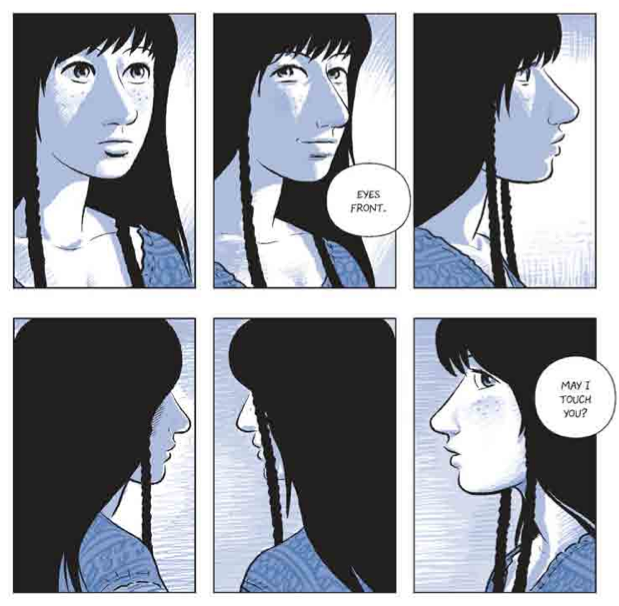 That visual characterization is not reserved purely for David or moments of intense emotion. It is present on every page. In a much more relaxed scene when David asks his friend Meg to act as a subject for his sculpture, McCloud details her personality in a very subtle manner. He moves in a 360 degree motion around her head over the course of six panels. Even when attempting to remain perfectly still, Meg's personality emerges. She is direct and filled with energy, unable to resist smiling and making eye contact. There is also a sense of trepidation as her eyes pull towards David as he circles around her. The romantic tension in the room and her questioning nature emerge from only a shift in her eyes and slight opening of her mouth.

This consistent level of characterization in every panel of art builds a close connection between readers and both David and Meg over the course of almost 500 pages. They are fully formed human beings, and it is impossible not to care for them and to even fall in love with them a little bit. Everything about them, their histories, hopes, flaws, dreams, skills, etc. is brought forth in these pages. The Sculptor gives life to these two individuals and their relationship, all of which feels as real as any human experience.

It is through his focus on the personal that McCloud is capable of conveying ideas of a much grander scope. Through their experiences and personal philosophies, the themes of The Sculptor emerge. Reaching the final section of the comic, there is a blossoming effect as the refined work of each previous page begins to merge and spiral into an awe-inspiring climax. It is an experience that feels simultaneously intimate and universal, one that will stick with readers as they continue to live their own lives.

McCloud's immense skill in The Sculptor reflects David's own gifts. Whereas David was given the ability to shape his art so perfectly by Death, McCloud came upon it through decades of study and work. The end result in both cases is spectacular. Whether it is in the shape and form of a moment captured in stone or the fine construction of panels, figures, and words, both men are capable of perfectly translating the thoughts locked within their heads into a reality to be shared. Every formal aspect of their work reflects a specific choice. There are no accidents in The Sculptor; lines, shapes, words are all chosen with purpose.

The beauty in both of their works is not derived purely from mastery of their chosen forms though. As David learns throughout his struggles, skill is only one facet of art. What empowers both his and McCloud's work in the final pages is experience and passion beneath their choices. Meaning within The Sculptor is derived from McCloud's own life: living in New York City, pursuing his art, and falling in love. David Smith is not Scott McCloud, but he and his story are instilled with humanity by McCloud. As a result The Sculptor is a truly human comic, connecting both creator and reader within a shared experience.

The Sculptor will be available at all major booksellers and comic book stores on February 3, 2015.