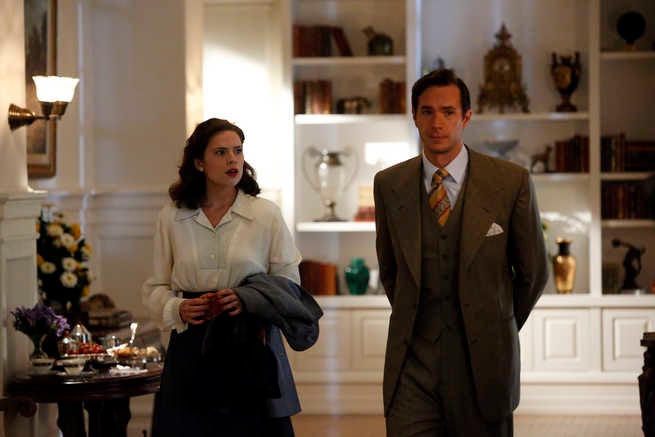 No matter the era, Jarvis has been an integral part of both the comic & cinematic versions of the Marvel Universe. Whether it's helping Howard or Tony Stark, Jarvis has proven to be a valuable asset not only to those two but to Agent Peggy Carter as well. With only two episodes of left of Agent Carter, we sat down with the man himself, James D'Arcy about stepping into the role, key relationships and of course, future Easter eggs.

Looking back on the show, how have you handled the overwhelming positive response to the show?

Well…to be honest with you, I’m not on any social media. So any response that I encounter is someone in the street who wants to talk about it. I’m so aware of reviews and such, but to me, considering the amount of fun we had on set, that’s what makes it worth it for me.

Filming the show was a labor of love. The writing was spectacular and being able to work with Hayley was phenomenal. You know, with Marvel you’re going to get great action and adventure while sometimes you forget that they pack their movies with wit, intelligence, & great character development. Those last three are some of the things Marvel does best hands down. To be honest, I keep forgetting that this is the way they operate. They’re the best at finding the fun.

As someone who works in that environment for a living, everyone was incredibly smart and on top of their game. They’re all generous with their gifts and not at all precious about it.

Once you got into the groove during filming, which of the relationships that Jarvis had built were your favorite?

Well I predominantly really only properly interacted with a few characters. I spent most of my time with Peggy, and a little time with Howard when he was there. I think the interrogation scene he had with Thompson went exactly as you would suspect with those two, which was a lot of fun.

As we race to the finale, it all comes together in a real organic way. Jarvis becomes much more involved with the folks at the SSR and and as a result, builds some surprising alliances with some unexpected turns along the way. But that's all I can really say towards that!

One of the characters we have not seen on the show that Jarvis has a close relationship with, is his wife! What is she like? What can you tell us about her?

Well no more than I already have! It’s been a topic of great fun because it’s a question I enjoy dancing around. What I love about Jarvis’ wife is that she’s inspired a ton of questions and investigation. I don’t want to spoil it for anyone by saying she’s blonde, or brunette. Maybe we’ll find out. Maybe not. It’s been deliberately left out by the writers so that people can use their imagination and I’d hate to ever limit that for someone.

The time period that the show takes places in seems to be one that everyone else we’ve spoken to has had a lot of fun with. How have you enjoyed being in the 40s for this role?

Its been interesting because the show is genuinely old school. It also makes you take a look at how our lives are run by our smart phone these days. Back then, things took time! You have to do it the hard way! Which as an actor, is super useful.

The 40s had fantastic sense of style too. We get to wear fancy clothing, drive gorgeous cars, and arriving on set each day is like stepping through a portal into that world. I think there is a level of cordialness, or dignity in ones interactions that perhaps may seem old fashioned. But that stuff is beautiful. I personally love the fact that Peggy always calls Jarvis,”Mr. Jarvis,” and that Jarvis always calls Peggy, “Ms. Carter.” There's something endearing about that.

There have been loads of things about the 40s that are super joyful. For me, some of the sets that we walk on to, I get a real kick because it reminds me of the old black and white films I watched as a kid. For instance, we walked on to one of the scientist lab sets, and it was SO basic. The tables only had 4-5 tubes on them.

Have you taken any of the wardrobe cues into your every day life?

That's the long and short answer on that. The costumes are great, but I don’t live in the 1940s.

Let’s talk about the gadgets a bit, since you’ve had the chance to play around with them quite a bit. When I spoke with both Tara and Michele about them, they loved that they felt a bit old school, while still being pretty futuristic. Which of them is your favorite?

Well there is a gadget coming up tonight in episode 7 that is pretty groovy. I think if you’re a Marvel fan, it’s a bit of an Easter egg as well. Double the fun!

Were you a huge comics guy growing up?

See, more of my interaction with the Marvel Universe has been through the movies. You’d have to be living under a rock to miss those. As a kid, my cousins were more the comic fans growing up. I was very much into the ads in comics more than the comics themselves. You know, cut this out, mail it in and get X-Ray specs. The X-Ray specs were the ones that converted me. Not to say I didn’t read a few comics, but it was always the ads that I loved to read.

This is one of the things that I love about the show. It doesn’t need much knowledge of the history of any Marvel Universe. It helps if you saw Captain America, but you don’t have to have seen Thor for Agent Carter to make sense. I hope that makes the show attractive who may have missed out on the movies, and the comics.

Staying on the larger Marvel Cinematic Universe for a second, if given the chance, who from the universe would you want to share a scene with?

I’m going to pick the real obvious answer here. Who wouldn’t want to see an older Jarvis with a younger Tony Stark? I mean, Tony would have to be REALLY young. It would be awesome to share the screen with Robert Downey Jr. but I don’t think even movie magic could make that happen.

Heading into the finale, do you have any final thoughts?

It has a VERY satisfying finish. Quite often, shows wrap up a season and they don’t address everything that was raised during it. This show will check off every box for every question you had during it. It’s exciting, fun and most of all, moving. Then, when it’s all over, there is a HUGE Easter egg for Marvel fans.

Are you guys excited for the last two episodes of Agent Carter? What have been some of your favorite parts Let us know below!

Attack on Titan Creator Responds to Criticism Over the Finale

The Book of Boba Fett: First Merchandise From Star Wars Spin-Off Out Now