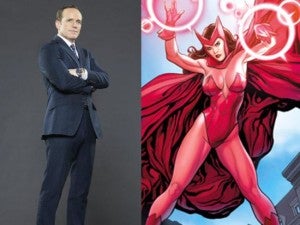 With the second episode of Agents Of S.H.I.E.L.D., Agent Coulson definitely appears to be dropping a major hint that magic played a big role in his return. When Skye asked Agent Coulson if he was shot, Coulson said an Asgardian stabbed him through the heart with a Chituari scepter. When Skye said she heard that they sent him to Tahiti to recover, Agent Coulson replied, "It's a magical place." It's actually the third time that Agent Coulson has described Tahiti as a magical place (second time to Skye). In fact, Skye even reminded him that he had mentioned that before. Also, the official Agents Of S.H.I.E.L.D. twitter account even tweeted the "Tahiti is a magical place" line after last week's episode. One of our initial theories was that Scarlet Witch used magic to bring Agent Coulson back to life. In the comic books, Scarlet Witch has had the ability to resurrect the dead in some story lines. Scarlet Witch is scheduled to be part of Avengers: Age Of Ultron, and there were hints in the original Avengers that Coulson's mystery girlfriend might be the Scarlet Witch. Of course, Scarlet Witch isn't the only magical entity in the Marvel Universe. We have it on good accord that a Doctor Strange movie is part of Phase Three for Marvel Studios. Agents Of S.H.I.E.L.D. would be a great place to lay the ground work for the introduction of Doctor Strange. Whether it was Scarlet Witch or Doctor Strange, it is certainly starting to look like magic is why Coulson lives.

Agents Of S.H.I.E.L.D.: Is Magic Behind Agent Coulson’s Return?