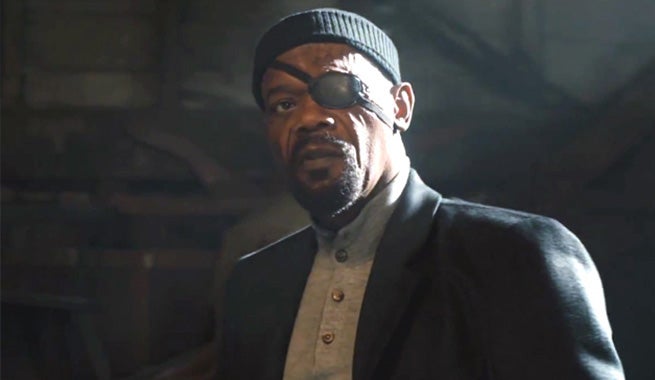 Many fans who know the ins and outs of the Marvel Cinematic Universe have been left wondering how a few aspects of Avengers: Age of Ultron's storyline came to be. Be warned, spoilers follow if you have not yet seen the Avengers sequel, as well as mild Agents of S.H.I.E.L.D. spoilers.

It's no secret that some plot points in Age of Ultron have fans scratching their heads. While some of those questions will be answered in the extended director's cut on blu-ray, when it comes to how Nick Fury showed up to a flying Sokovia in the Helicarrier- that will be explained on an upcoming episode of Agents of S.H.I.E.L.D..

When asked by SlashFilm whether or not we'll find out about Fury's unseen adventure, Feige said "I think it's fair to say you could fill in some of those blanks in the coming weeks on Tuesday at 9," of course, referring to Agents of S.H.I.E.L.D.. Whether or not Samuel L. Jackson will appear on the ABC series is unconfirmed, but one would assume in order to tell Nick Fury's story, the actor who plays the former S.H.I.E.L.D. director would have to be present.

Having seen Captain America: The Winter Soldier, we know that S.H.I.E.L.D.'s resources, including their helicarriers, are all but destroyed after Hydra's coming out party. While Agents of S.H.I.E.L.D. pointed to the raid from the beginning of Age of Ultron prior to it's release, a new episode will take place after Ultron, explaining Fury's off screen story.

Are there other plot holes from Avengers: Age of Ultron you want explained? Do you enjoy when the movies and television shows overlap and affect one another?

Agents of S.H.I.E.L.D. airs Tuesdays at 9 PM Eastern on ABC.

Agents Of S.H.I.E.L.D. Will Fill In Some Of The Blanks For Avengers: Age Of Ultron

Ant-Man 3: Could Quasar Be Making MCU Debut in Quantumania?