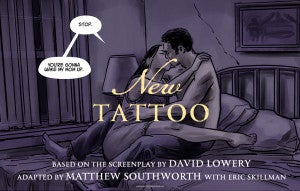 Ben Affleck may not have jumped at his (rumored) chance to direct Justice League for Warner Bros., but now his brother Casey is in a comic book movie--sort of.

IFC Films has released a new, 24-page graphic novel that serves as a prologue to Ain't Them Bodies Saints, currently in limited release and starring Affleck, Rooney Mara and Ben Foster.

Set against the backdrop of 1970's Texas Hill Country, Ain't Them Bodies Saints is a romantic American story that follows three characters on various sides of the law - outlaw Bob Muldoon, his wife Ruth Guthrie, and a local sheriff named Patrick Wheeler, who gets caught in their crosshairs. The film, which is the second feature from writer-director David Lowery, was developed at the Sundance Institute's Writing and Producing Labs and also stars Nate Parker and Keith Carradine.

The graphic novel was created by Criterion Collection artist Eric Skillman and comic book artist Matthew Southworth. It premiered at Entertainment Weekly, but you can check it out at right and below.

It's seemingly getting more and more common to release a promotional comic book tie-in to films; just last week, a comic set in the world of The Grandmaster of Kung-Fu was released for free online.